Jewish prisoners in Plaszow unload bread into the Madritch factory. 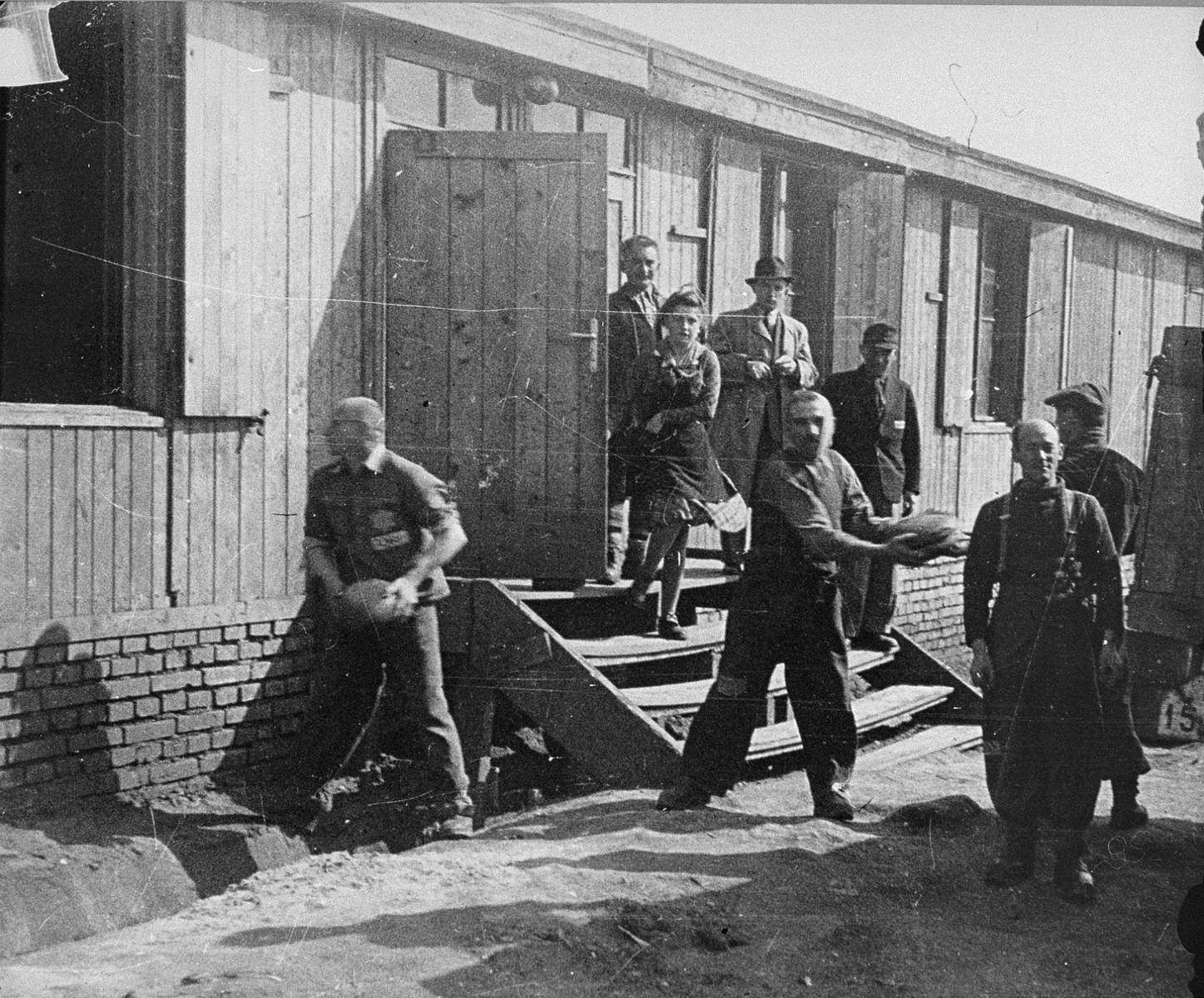 Jewish prisoners in Plaszow unload bread into the Madritch factory.

Pictured on the steps are Samuel Brand and his wife, Ala Fass Brand.

Biography
Samuel and Ala (Fass) Brand both grew up in Tarnow, Poland. Samuel Brand is the son of Abraham (Albert) and Sara (Silber) Brand. His father was a bookkeeper. Ala Fass is the daughter of Kalman Josef and Kyla (Greenfeder) Fass. Her father owned a hat factory. When the war broke out in September 1939, Samuel, then a chemistry student at the Jagiellonian University in Krakow, was home for vacation. On September 4, he fled to Lvov with his sister and brother-in-law and remained there throughout the Soviet occupation. In June 1941, the German army invaded the Soviet Union and Lvov fell under Nazi control. Six months later, in December 1941, the father of Samuel's brother-in-law managed to rent a truck, and the three made the dangerous 600-mile trek back to Tarnow, where they rejoined the rest of the family in the ghetto. While living in the ghetto, Samuel began dating Ala Fass. Samuel was in possession of an American visa, which he had obtained before the war after he was admitted to the Columbia University medical school. On the strength of that visa, he qualified for a German exchange program, which purportedly allowed its participants to leave Poland in exchange for the release of German POWs held by the Allies. Samuel decided to speed up his courtship and marry Ala as soon as possible in the hope that she, too, would become eligible for the prisoner exchange. They received a marriage license from the Polish governor and wed on May 23, 1943. The exchange scheme, however, came to naught, and almost all of those who were slated for exchange were shot. Shortly after their wedding, Samuel and Ala were sent together to the nearby Plaszow concentration camp. Initially, they were assigned work making uniforms for the German army. Then the Germans announced that they were looking to register trained scientists and mathematicians for a special science unit. Since Samuel was trained as an organic chemist, he registered himself and Ala (though she did not have a scientific background). The two became part of a special group of scientists (numbering approximately 35 men and eight women) that was given the task of looking for ways to blow up enemy airplanes while in flight. The unit worked in special barracks under somewhat more humane conditions than the rest of the camp. The group was supervised by an SS general and headed by a Polish professor from Warsaw University. The professor managed to convince the SS general to allow him to return to Warsaw in order to obtain necessary scientific texts from the library for their research. Once he was safely away from the camp, however, the professor escaped and never returned. A Jewish pharmacist from Krakow took his place as director of the unit. In September 1944, as Soviet troops approached the area, the science unit was evacuated as a group to Flossenbuerg. Since there were no women's barracks in Flossenbuerg, Ala and the rest of the women were quickly transferred to Ravensbrueck, where they were put to work at the Siemen's plant. After the Germans felt it was safe for the scientists to resume their work, the men were transferred back to Plaszow. Soon afterwards, Samuel approached the SS general in charge of the group and convinced him that the scientists would be far more productive if their wives could rejoin them in the unit. Three weeks later the women returned to Plaszow. Samuel lived in the camp and every day went under police escort by truck to Podgorze to work in the laboratory of the Academy of Mines. Since the same two policemen accompanied the scientists each day, Samuel got to know them and was able to bribe them to receive permission to purchase extra food and incidentals to bring back to Plaszow. One day, Samuel noticed a nice pair of women's boots, which he purchased for Ala and brought back to the camp. When Plaszow was liquidated in January 1945, Ala and Samuel were deported to Auschwitz. The camp was in a state of chaos when they arrived, and Ala was allowed to keep her own clothing, including the boots. Though the male and female prisoners were kept in separate camps, Ala and Samuel managed to meet once by the barbed wire fence dividing the two camps. They agreed that they should use Samuel's aunt in Brooklyn, NY, as a contact to find each other after the war. A few days after arriving in Auschwitz, the camp was evacuated and Ala and Samuel were sent out on a forced march. Ala was marched to Gleiwitz and from there, taken by open horse train to Bergen-Belsen. Samuel ended up in the Sudetenland at the Rychnow labor camp (near Jablonec). Soon after his liberation on April 8, 1945, he was taken to the hospital in Jablonec for treatment. One day, a French colonel visited the patients in the hospital. After a doctor implied that Samuel was not expected to survive, the colonel asked Samuel if he could do anything for him. Samuel requested that he mail a letter to his family in Brooklyn. Several weeks later Samuel was handed a letter from his aunt with an enclosed letter from Ala informing him of her whereabouts. She had been evacuated to Sweden soon after the liberation and was then working in a chocolate factory. Her boss agreed to help Samuel secure a Swedish visa by promising him work at the factory. After a two-year separation, Samuel was reunited with Ala in Sweden, and in 1948 they immigrated together to the United States.