Germans as victims in the literary fiction of the Berlin Republic / edited by Stuart Taberner and Karina Berger. 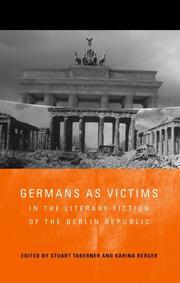 Physical Description
vi, 259 p. ; 24 cm.
Other Authors/Editors
Taberner, Stuart.
Berger, Karina, 1977-
ISBN
9781571133939
1571133933 (hardcover : alk. paper)
Notes
"In recent years it has become much more accepted in Germany to consider aspects of the Second World War in which Germans were not perpetrators, but victims: the Allied bombing campaign, expulsions of "ethnic" Germans, mass rapes of German women, and postwar internment and persecution. An explosion of literary fiction on these topics has accompanied this trend. Sebald's The Air War and Literature and Grass's Crabwalk are key texts, but there are many others; the great majority seek not to revise German responsibility for the Holocaust but to balance German victimhood and German perpetration. This book of essays is the first in English to examine closely the variety of these texts. An opening section on the 1950s -- a decade of intense literary engagement with German victimhood before the focus shifted to German perpetration -- provides context, drawing parallels but also noting differences between the immediate postwar period and today. The second section focuses on key texts written since the mid-1990s shifts in perspectives on the Nazi past, on perpetration and victimhood, on "ordinary Germans," and on the balance between historical empathy and condemnation. Contributors: Karina Berger, Elizabeth Boa, Stephen Brockmann, David Clarke, Mary Cosgrove, Rick Crownshaw, Helen Finch, Frank Finlay, Katharina Hall, Colette Lawson, Caroline Schaumann, Helmut Schmitz, Kathrin Schödel, and Stuart Taberner"--Publisher's website.