Invasion Balkans! : the German campaign in the Balkans, spring 1941 / George E. Blau ; with a new foreword by John E. Jessup. 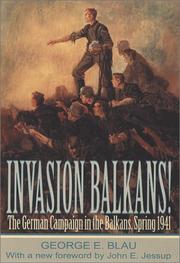 Previously published as: The German campaigns in the Balkans, spring 1941. [Washington] : Dept. of the Army, 1953.