Hitler and Hindenburg at night (1/30/33), at window of Hotel Kaiserhof. Crowd goes wild. SA putting up antisemitic signs in Jewish stores, painting windows, wearing signs on the day before the boycott of Jewish stores (3/30/33). Crowds watch. SA pile into open truck, driving through street, chanting: "Kauft nicht bei Juden." Goebbels' speech (4/1/33) at Lustgarten announcing boycott of Jewish businesses. LS of crowd. Heiling. MS of Goebbels on balcony. Hitler's speech (4/8/33) to SA and SS at the Berlin Sportpalast. Title: At the Berlin Sportspalast, the Reichschancellor thanks the assembled SA and SS for their loyalty, their courage, and their perserverance." Opening shots are LS (from above) of the audience. MLS of Hitler walking through crowd to podium. Hess and Roehm occasionally visible near podium. Hitler: "That great moment...has arrived, Germany is now awakened...is the master of her own destiny." 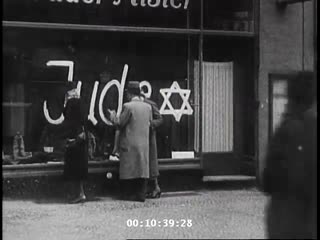