German soldier checking papers at wooden gate. Judenrat/Jewish Council sequence: rabbis approach and enter building, up stairs. CU signs. Interiors. Men enter office of Czerniakow, head of the Jewish Council.
Czerniakow greets men, sits at desk, talking to them and to a man standing beside him. Pictures are on the walls, including a portrait of Pilsudski.

Staged scene of meeting. See: "The Warsaw Diary of Adam Czerniakow": May 3, 1942 -- "At ten the film crew from the Propaganda Office arrived and proceeded to take pictures in my office. A scene was enacted of petitioners and rabbis entering my office, etc. Then all paintings and charts were taken down. A nine-armed candlestick with all candles lit was placed on my desk..." 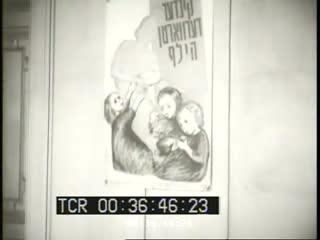