Nicely dressed men, delegates from a "new organization of Orthodox Jews," gather outside the Congress Building, chatting, posing, smoking. Names of rabbis and community leaders are listed on card catalogue, but difficult to determine correspondence to footage. 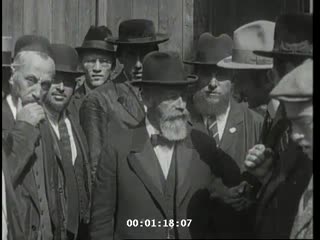