English intertitles. "Metrotone hits the Romany Trail: A Visit to a Camp of Cheerful Gypsies in the Balkan Mountains"
Roma children and adults dancing and playing instruments (and seated, watching) outside tents. Some good MCU, mostly MS. Dust, bright sun, haze/smoke? Smiles everywhere. Great CUs of Roma boys singing. Kids swarm around visitor who is giving out "coppers." Romani woman reads fortune of visitor from cards. 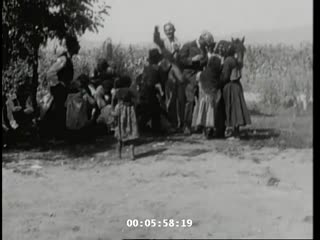