MS, MCU, and CU of several takes of Romani people ("gypsies" according to USC catalog) playing in a small "orchestra" in a not-very-busy restaurant. Musicians dressed in suits. 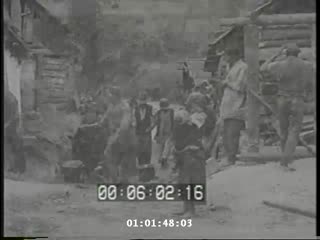 Legal Status
Permanent Collection
Film Provenance
The United States Holocaust Memorial Museum purchased this from University of South Carolina Newsfilm Library in Columbia, South Carolina in April 1992. The footage was obtained as research for the Museum's Permanent Exhibition.
Note
See Story 543 for newsreel containing some of these outtakes of the Jewish Memorial Pageant.