Memorial service/pageant/event organized by the "Committee for a Jewish Army of Stateless and Palestinian Jews," dedicated to the "two million Jewish dead of Europe." LS of stage with big cast and chorus. MCU of Paul Muni reading (dramatically) about "the problem [belonging to] humanity." VLS participants, rabbis, actors (including Rod Steiger), etc on stage. Reciting Kaddish. 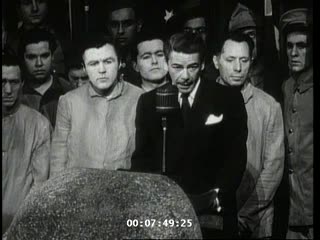 Film Title
Memorial Pageant to the Persecuted Jews of Europe

Conditions on Access
This archival media can only be accessed in a Museum reading room or other on-campus viewing stations.
Copyright
Moving Image Research Collections
Conditions on Use
For rights clearance, contact Ben Singleton at 8037776211 or BSINGLE@mailbox.sc.edu.