Black Legion of Ustasa on manuevers and searching for partisans.

Dancing at town festival. 01:17:20 LS Jeep moves along road, soldiers run across open ground, fire weapons from prone position, advance toward large farm house and maneuver around buildings. 01:18:01 Soldiers walk across road, CU next to jeep, Ustasa men appear to be wearing German uniforms with Ustasa insignia. One puts bird on his shoulder. POV through windshield of vehicle. CU of driver. 01:18:52 Ustasa officer salutes soldiers in street, walks to jeep. Men lift wooden road barrier. People hoe in field. Ustasa oversees civilians (Muslims?) digging trench. 01:19:36 Panorama as Black Legion Ustasa men swarm into rocky hills and bring down captured partisans under guard. One partisan's body is on ground, presumably shot. MCU of older man in Muslim style hat. Prisoners brought down with their hands up. CU of young prisoner (prior to his being shot?) 01:21:39 Civilians working in field in presence of Ustasa. 01:22:19 POV from jeep, then soldiers in mountains/woods, panorama of town in valley. 01:23:38 Ustasa officer stands with local farmers in field, Max Lubovitch in uniform is present. 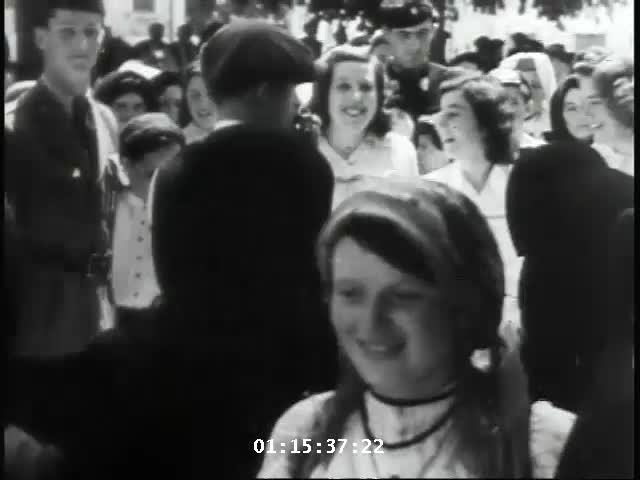