With voiceover. EXT, buildings and homes overlooking Lake Geneva. Architecture of the Hotel Royal, the conference center for the committee. CU, Myron C. Taylor, the spokesman for the United States and the initial president of the committee, walking with a group of men including James McDonald (seen clearly at 06:57:58 - the tall man with white hair). French senator Henry Béringer and Great Britain’s Lord Winterton outside the Hotel Royal. Pan around the large conference room and delegates. Taylor addresses the committee members. 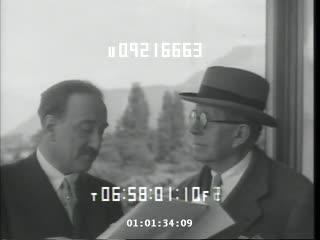 Film Title
Hearst Metrotone News of the Day, Volume 9, No. 289

JEA order #1666.4-W.
The Evian Conference took place from July 6-15, 1938. Delegates from 32 countries and representatives from relief organizations met in Evian-les-Bains, a spa town in France, to discuss the German-Jewish refugees. The United States encouraged all countries to find a long-term solution to the problem. However, the United States and other countries were unwilling to ease their immigration restrictions. Most countries feared that an increase of refugees would cause further economic hardships. With the exception of the tiny Dominican Republic, no country was willing to accept more refugees. One result of the conference was the establishment of the Intergovernmental Committee on Refugees (ICR), which would continue to work on the refugee problem.
Copied From
35mm print
Film Source
John E. Allen, Inc.
File Number
Legacy Database File: 1138
Featured In
Holocaust Encyclopedia - Historical Film Footage: Evian Conference fails to aid refugees - Featured Use

Copyright
Copyright. UCLA Film and Television Archive
Conditions on Use
Footage must be obtained directly from the UCLA Film & Television Archive. Contact footage@cinema.ucla.edu for permission to use material from the Hearst collection.
Record last modified: 2020-02-04 10:38:56
This page: https://collections.ushmm.org/search/catalog/irn1000617