VSs, crowd of internees waving at passing armored vehicles. VSs, people waving to passing tanks. MLS, American women internees. CU, Polish woman and her baby grandaughter. 04:26:02 Aaron Rapoport (a furrier) with his three daughters, Malka, Bola, and Chana. VSs, Mr. and Mrs. Rymanowski and son, Teddy. VSs, three little girl internees hold American flag, one of them is giving the "V" for Victory, the one behind the flag is Rodi Glass (better CU at 04:26:58). VSs, Mr. and Mrs. William Irwin.

Private Eldon Nicholas, who was a Red Cross aide, entertains internee children through the barbed wire with a puppet shaped like a monkey. CU, children and women internees behind barbed wire, including two year old Edith Spielman Frankel and her mother, Helen Hudes Spielman, at 04:27:45. Edith's older sister Hanna Lore Spielman Schrob is the little girl on the far left at 04:27:55. VSs, children swarming over jeep. 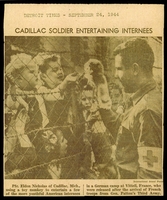 Legal Status
Permanent Collection
Film Provenance
The United States Holocaust Memorial Museum purchased this from the National Archives and Records Administration in September 1994.
Note
Eldon Nicholas's son Don donated Kiki, the monkey puppet, to the USHMM in 2009 (Accession Number 2009.203.2). Its chest bears the name "Kiki" and its back the inscription "USA Internment Camp -- Vittel France, Sept. 14, 1944." Below the date are the cryptic initials "J.G.H."

Aaron Rapoport appears with his three daughters, Malka, Bola, and Chana, in the film. Aaron's son, Jacob Benzion Rapoport, was also in the Vittel camp along with his wife, their mother, Feiga, and may also appear in this footage.

NARA incorrectly dated this footage as 1946.