EXT, green, hilly countryside. CUs and LSs of people attending a fair or festival. Countryside as seen from car, snow-capped mountains. Graffiti mocking Hitler, includes caricature of Hitler with large puffy cheeks. Women washing rugs at a river. Train moving along tracks through town as people pass by. People going to a house of worship (not certain whether a church or a synagogue). People in horse drawn wagon. LS, house of worship. Woman and girl laying flowers at memorial with American flag (several takes). LS, field. Building "OBCHODNI DUM". Children in red shirts, some of the boys are also wearing red skull caps. Soldier. Young people playing soccer, field, young people dancing in ethnic dress, filmmaker talking to dancer. (The scenes of dancing have been slowed down so that the motions of the dancers are more pronounced). LS, Spis castle, ox drawn cart, people getting on trolley, people on sidewalk, in a city or town, selling their wares. Countryside, clouds, city, clock, buildings. "Volte Komunisty" banner. EXT, buildings, river, bridge. Political billboard, posters on pole. Flags. Street scenes showing multitude of communist posters and flags. Large red sign on a pole near a bridge reads "CHAOS" in large white letters with a black diagonal line through it. Another sign on a similar bridge post is white with large black leaders: "KLIO". Planes in sky. Cut to a film title: "Ansco" in white letters depicting UNRRA's visit to Czechoslovakia. Men getting off Veteran's airline, being welcomed by others in Allied uniforms, unloading crates from plane, one crate has visible writing: "UNRRA PRAGUE", photographer sitting atop plane changing flash bulbs on camera, plane taking off, man posing with woman, both in civilian clothing in front of the plane, a nun in her habit and 2 other civilians talking to them, as well as a journalist (writing on note pad) and the photographer seen in a previous shot. Painting and assembling tractors from a scrap yard of tractor equipment. Military planes lined up on airfield, large crowd of civilian onlookers. Military planes flying in formation. Air Force soldier by plane with boy. Man posing with vintage horse drawn carriage, he is dressed in a black suit and top hat, several takes of the man in the carriage and driving the carriage. Parade in city, shot from inside a car. Wooden cart full of people and flowers and red banner with illegible writing parading down the street, waving to onlookers. A float with rainbows and buildings, flag processions, etc. Open-backed trucks with workers, side of one reads: "PRACI C'EST", side of another reads: "PRACOVNI SOUDRUH". Men in Communist workers' dress and women in traditional folk dress on the float, there is also a Maypole wrapped in ribbons the same color as the Czech flag. Float with a group of people dressed as scientists/chemists in a lab. Marching band. Another float with young men and women in traditional costumes, banner reads: "DRUHE' NARODNI DOZINKY". Many shots of people in ethnic dress dancing. Crowd scenes, CU young boy eating watermelon, he pauses to smile for the camera, speeches, people dancing, mock fight. Band of men in military uniform along parade route stopped in front of a building, sign above them reads: "CS SOCIALNI DEMOKRACIE". Fiorello LaGuardia exits a building with soldiers in uniform, he smiles for camera and waves. LaGuardia speaks with men in suits in open field at Lidice. Men are Vaclav Majer, Czech Minister of Food; Mr. Nemec, Czech Minister of Plenipotentiary and government delegate to the UNRRA; and Laurence Steinhardt, U.S. Ambassador to Czechoslovakia. One signs a book, and the group continues to walk through the cemetery at Lidice. Cut back to Prague: car leads a procession out of the main gates to the Prague Palace, several civilians line up outside the gate to wave to LaGuardia in the car. CU, LaGuardia receives flowers and shakes hands with civilians. People crowded around the car, taking pictures, etc. Cars, people waving, people on horses in crowd, parade continues. LaGuardia walks through the street wearing a large cowboy hat, accompanied by women in traditional dress. 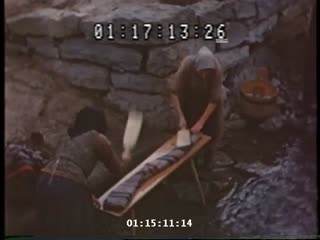 Copyright
Copyright. National Center for Jewish Film
Conditions on Use
Contact NCJF at pontius@brandeis.edu for permission to reproduce and use this film.
Record last modified: 2020-02-04 10:39:39
This page: https://collections.ushmm.org/search/catalog/irn1001283