Several shots of different groups of people on a field, each with a sign indicating their nationality: Protektorat, Kroaten, Franzosen, Belgier, Hollander, Ostarbeiter, Italiener, Bulgaren, Ostarbeiter. The narration indicates that these are work teams living and working in Germany. They go on to engage in athletic competitions, including tug of war, a track race, and a soccer game (France vs. Protektorat, France wins).

Military ceremony for the SS Galizien in Kolymna. Men stand on a wooden platform in a field, surrounded by a crowd. They carry flags and military standards, including what may be a variation on the Lviv coat of arms (or perhaps on the West Ukrainian People's Republic's coat of arms, which itself is likely a variation on the Lviv one), several swastika flags, at least two SS standards, and a banner with sword painted down the middle, reading "For Ukraine, For Freedom, For Honor, For Glory. --- U.G.A. 1918". SS Galiciana men parade through town, some dressed in traditional Ukrainian (and even Cossack or Tatar) clothing, others in civilian clothing, others in military garb.

Translation of Ukrainian narration:
A sport festival took place in [a German city, name not audible] among European work teams whose members work in Germany. Race. National teams. And the winner is France. A soccer match between France and the Protectorate. The French are wearing bright shirts. And the French team wins 2 to 1.

[Kolomiya/Galicia/Western Ukraine.] In Kolomiya, Galicia, a manifestation of volunteer units took place. This area in North-Eastern Galicia contributed the largest number of volunteers to the newly formed SS-Galicia division. The governor addressing the manifestation said: "By joining these ranks of volunteers you confirm that you are not keeping apart from the European battle but together with others you accept the battle. You want to serve your homeland and a new Europe. Your fight is for a better and greater future. And this fight will continue until the very end." Shoulder by shoulder with the German soldiers these volunteers are going to fight against the Bolsheviks. 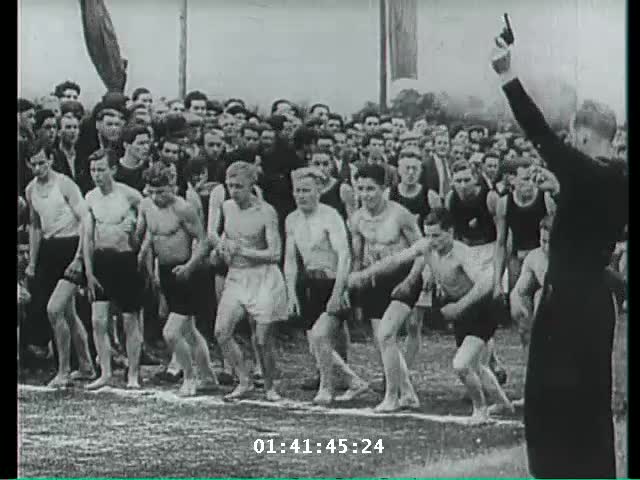 Legal Status
Permanent Collection
Film Provenance
The United States Holocaust Memorial Museum purchased this collection of moving image segments from the Central State Film, Photo and Sound Archive at the Ukraine National Archives in Kiev, Ukraine in 2001.
Note
Duplicate footage, RG-60.3477 and RG-60.3478, Film ID 2490.
SS-Galicia Waffen: Waffen-Grenadier-Division der SS "Galizien" (also known as the 1st Ukrainian Division of the Ukrainian National Army). In 1943/1944 a determined group of young men and women in Galicia - the western area of the Ukraine that borders Poland - volunteered to serve in a combat division destined for eastern front combat. Their goal: to engage and destroy the Soviet hordes menacing their homeland and to counter Nazi Germany's subjugation of their country. Although initially Galicia's volunteers would serve in a German sponsored military formation, in actuality the volunteers of the Galicia division wanted to engage all hostile ideologies - both from the east and west - in order to secure a free independent Ukraine.

U.G.A. refers to the Ukrainian Galician Army, which was the regular army of the West Ukrainian People's Republic, established in late 1918 and dissolved by early 1919. It was territory claimed by Ukrainian nationalists who wished to establish a Ukrainian nation following WWI (when Poland finally gained statehood). Much of the area it covered, however, was contested: many Poles (and others) lived throughout the region, which included Galicia, Transcarpathia, and Bukovina, especially in its capital city, Lviv (Lwow), which was, at the time, more Polish and Jewish than it was Ukrainian. Within months, Polish forces pushed Western Ukrainians out of their new capital. Many Ukrainian nationalists saw the Nazis as ideological allies who could help them drive out the Poles and the Soviets, both keys to establishing a post-war Ukrainian nation. Similarly, when recruiting collaborators, Nazis often appealed to already-existing senses of nationalism and ethnic tensions (many of which had only begun to take hold in the past couple of decades). Collaboration was a chance to exact vengeance upon Poles, or Ukrainians, or Soviets. Nazis were careful not to encourage too strong a sense of nationalism in their allies, however; for instance, the Ukrainian SS Division was purposefully named "Galician", not "Ukrainian".
Copied From
35mm
Film Source
Central State Film and Photo Archive of Ukraine (TSDKFFA)
File Number
Legacy Database File: 3449
Source Archive Number: 3281