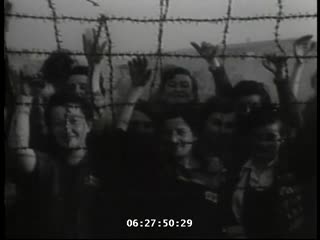 Legal Status
Permanent Collection
Film Provenance
The United States Holocaust Memorial Museum purchased the collection from various sources in 1988. Footage was obtained as research for the United States Holocaust Memorial Campaign's promotional video called "A Campaign to Remember" by David Haspel & Associates.
Note
Narrator's voice is not heard throughout.
See also Story 2597 and 2598, Film ID 1000 where the film was screened in part as a Welt im Film newsreel, issue no. 5.

Mrs. Rosalie Weisner identified by her daughter Jolly Zeleny who also survived Belsen. See correspondence in departmental files from Joan Ringelheim.
This documentary, called "German Concentration Camps Factual Survey" on the liberation of the German concentration camps in 1945 was assembled in London that year, but never shown until PBS FRONTLINE first broadcast it under the title "Memory of the Camps" -- 40 years later -- in May of 1985. Five of the film's six reels had survived in a 55-minute fine-cut print without titles or credits. In 1952 the five reels, together with an undated, unsigned typed narration which closely matched the edited film, were transferred from the British War Office film vaults to London's Imperial War Museum. The Museum gave the film the title "Memory of the Camps." A shot list dated May 7, 1946 suggested that the missing sixth reel comprised Russian film of the liberation of Auschwitz and Majdanek. But this reel had been left in Moscow in the hands of the Russian cameramen who shot it.

"F3080" was the name given to a project to compile a documentary film on German atrocities. The project originated in February 1945 in the Psychological Warfare Division of SHAEF (Supreme Headquarters Allied Expeditionary Force). Sidney Bernstein, chief of PWD's Film Section, began preparations for producing a film using material shot by the service and newsreel cameramen accompanying the British, American, and Russian armies. As the Allied forces advanced in the final weeks leading up to the German surrender, cameramen of the British Army Film Unit and of the American Army Pictorial Service began to make a systematic record of the newly liberated concentration camps. By early May 1945, the British Ministry of Information and the American Office of War Information began collaborating on the collation and rough-cutting of the film material. During that summer of 1945 some of the editing was done under the direction of Alfred Hitchcock. FRONTLINE took the film, added the script and asked the late British actor, Trevor Howard, to record it. The aim was to present the film unedited, as close as possible to what the producers intended in 1945. A new restoration was completed by the IWM in 2014.
Copied From
35mm; b/w
Film Source
David Haspel & Associates
File Number
Legacy Database File: 2023
Featured In
Holocaust Encyclopedia - Historical Film Footage: Bergen-Belsen after liberation - Featured Use