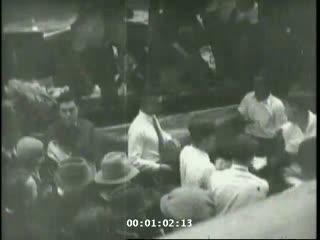 Copyright
Copyright. ITN Source
Conditions on Use
For enquiries about archive footage please contact ITN Source in America at nan.halperin@itnsource.com or Getty Images on +44 (0) 207 428 6109 or at itn.archive@gettyimages.com.
Record last modified: 2020-08-04 09:19:43
This page: https://collections.ushmm.org/search/catalog/irn1001675