This video contains three films of Leeuwarden from the collections of the Frisian Film Archive.

00:33:47 to 00:43:19 - Filmed before World War II. Private residences and passing pedestrians. Cars and bicycles sporadically dot the streets. Man smokes a cigarette, conversing with a female companion on a nearby bench. A middle-aged woman sweeps her front porch; a younger woman polishes a door-handle. A boy teaches a younger boy to ride a bicycle. A group of three children in fancy dress playfully approach the cameraman. A class of schoolchildren performs gardening work, overseen by their teacher. Children with buckets, shovels. More children of various ages ride bicycles. Title card: "Schooljaar 1937" Led by their teachers, boys' class exits the school building, followed by girls' class. The children mingle in the playground, and then dance in a circle. The teachers look on, and conduct a private discussion by the school entrance. Mobilization of Dutch troops. Dutch military procession passes through the streets, as hundreds of people observe. Motorcycles, bicycles, armored cars, tanks, and other artillery form the procession. The procession ends, and the crowd dissipates. People can be seen carrying chairs home from the display. Brief shots of a group of police officers on horseback, riding in formation through the streets; and a Liberation Day celebration parade. Banners read "Voor Oranje Een...". Parade is comprised of boy scout-like groups, young girls dressed in white carrying flowers, children and adults dressed in traditional Dutch clothing, and a marching band. Men on horseback. A second banner reads "Hulde Leeuward Scholieren" ["Tribute by Leeuwarden Students"]. The procession continues with a flag-waving display by people of all ages, and a brass marching band. A decorated car passes with the word "Esperanto" displayed prominently. The parade concludes with a procession of soldiers. Cut to shots of crowds gathered in a public park at winter time. Spectators wear overcoats and hats, snow on the ground. They have assembled to watch an outdoor ice-skating race. Banner: "Eind Controle" ["Finish Line"]. Flowers are given to the female race winner. Children dragging their sleds in the snow-covered park. Fade.

00:43:34 to 00:53:22 "Leeuwarden, diverse opnames tijdens de oorlogsjaren, 1939-1945" filmed by Ruurd Rodenburg. (AV3336) This video transfer was made at the wrong speed, and should run 17 minutes long. Military drills. Soldiers stand in formation as superiors issue commands. A crowd of civilians looks on. Military commanders greet one another. The soldiers then march through the streets. Brief shot of a plane in flight. A soldier lowers the Dutch (?) flag. Poster "Nederland In Oorlong Met Het Duitsche Rijk" [Netherlands at war with German empire] (proclamation of German invasion). Overhead shots (from interior window) of confiscated trucks in the streets. Civilians visit a graveyard in Grebberberg. A headstone for a member of the 22nd Infantry Regiment appears in CU. Flowers line the graves. Overhead shots of the rounding up of slave laborers / deportation, and the Dutch Nazi party marching in the street. Aerial shots of the eviction of the Dutch Jewish De Jong family from their home. They stand by their home, carrying belongings as people look on. The family eventually turns, and walks out of frame. More shots of the Dutch Nazi party marching in the street. "Removal vans" outside of the De Jong family home are loaded with the family's remaining belongings. Aerial shots of horse-drawn carriages in the snow and people in the street. A construction or demolition project is in the works. Slave laborers saw planks of wood, hammer nails, and tear down walls in some kind of construction site. More Nazi (?) officers meet in the street, and shake hands. They drive away, waving a flag from the vehicle window. More Nazi (?) soldiers march in the street.Interior Military Forces of the Netherlands (NBS) [Dutch Internal Combat Forces] receive rapturous welcome. Soldiers sign autographs, and converse with the young men. A car is emblazoned with graffiti reading "NBS". NBS soldiers atop tanks roll through the streets as civilians wave and applaud. Young men mull around stopped NBS vehicles. People wait in line next to a "Coop Condensfabriek Friesland" truck to receive rations of condensed milk products. Fade.

** On November 12, 1942, the dentist Ruurd Rodenburg had the presence of mind to film from behind the curtains of his bedroom window how his Jewish neighbors, the family De Jongh, who lived at Spanjaardslaan 133, were taken by a Leeuwarden policeman from their home. Israel de Jongh and his three daughters Rachel, Bernardina Henderina, and Nicolina were deported that day on a train to Westerbork, and from there they were deported to Auschwitz, where they were all killed on November 19, 1942. On March 17, 1943 the De Jongh house on Spanjaardslaan was emptied by the removal company J. Postma, which was also filmed by Rodenburg, partly from the balcony of the house of the family De Jongh. An inventory of all objects was made before the furniture was taken. **

00:53:37 to end Map of Europe and “Degeto Weltspiegel.” Short propaganda film made by the Nazis. Officer lights a cigarette, and passes it to the cameraman. Various buildings in Leeuwarden. Male and female officers board a military truck, smiling at the camera. Two people wave from the window of a building. CU of a woman smiling in the truck. The officers help each other exit the vehicle. A woman sticks her tongue out at the camera. They explore the city streets, and take photographs of the surrounding buildings, much like tourists. They walk around the Leeuwarden docks, in good spirits. Cut to same officers exiting a building marked "Openbaar Onderwije". Another shot of the waterway. The officers walk down a set of steps. Brief shot of a small boat in the canal. 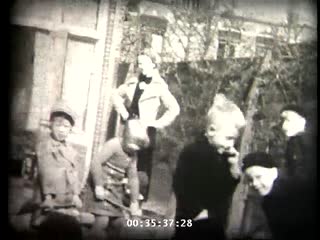 Biography
Israel de Jongh and his three daughters Rachel, Bernardina Henderina, and Nicolina were evicted from their home at Spanjaardslaan 133 in Leeuwarden, Netherlands on November 12, 1942. The were put on a train to Westerbork, and from there they were deported to Auschwitz, where they were all killed on November 19, 1942. On March 17, 1943 the De Jongh house on Spanjaardslaan was emptied by the removal company J. Postma.

Legal Status
Permanent Collection
Film Provenance
Most of the footage was shot by Ruurd Rodenburg, a local dentist.The United States Holocaust Memorial Museum purchased a video transfer of the film from the Verzetsmuseum [Resistance Museum] in September 1998.
Note
The De Jongh family did not survive Auschwitz.