Footage of liberation of camps. An appeal to raise money for displaced persons. Shows footage of a number of organizers and fundraisers, and speaks of an assembly in Atlantic City, NJ to raise one million dollars. Features founders of the UJA, JDC, United Jewish Fund, etc. Footage of Nazi war criminals at Nuremberg is interspersed with speeches given post war to US audiences. 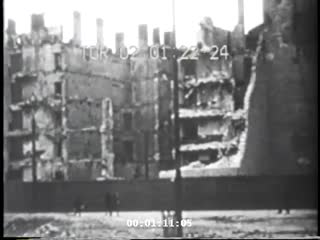 Conditions on Access
This archival media can only be accessed in a Museum reading room or other on-campus viewing stations.
Copyright
American Jewish Joint Distribution Committee
Conditions on Use
The American Jewish Joint Distribution Committee (JDC) (archives@jdc.org) film materials are on permanent loan to the National Center for Jewish Film (pontius@brandeis.edu) from whom the materials can be licensed.