Children stand in front of BIBLIOTEKA. 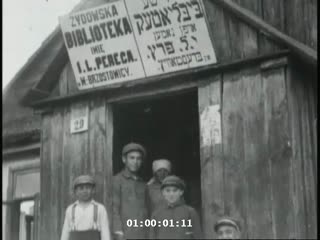 Copyright
Copyright. John E. Allen, Inc.
Conditions on Use
For permissions, contact John E. Allen, Inc. at jeainc@gmail.com with specific footage requests. Rates are based upon distribution and duration of use.
Record last modified: 2020-08-04 09:20:49
This page: https://collections.ushmm.org/search/catalog/irn1002050