A Day in Warsaw (clip) 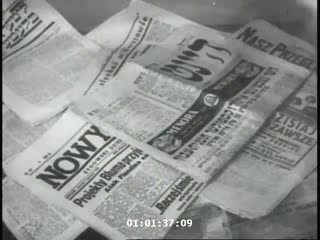 Legal Status
Permanent Collection
Film Provenance
The United States Holocaust Memorial Museum purchased this from John E. Allen, Inc. in March 1993. The footage was obtained as research for the "Life Before" audiovisual monitors in the Museum's Permanent Exhibition.
Note
See duplicate footage within Story 801, Film ID 514 with the same TC.
This USHMM tape was previously numbered as Film ID 251 and 514.

Copyright: NCJF and Spielberg Jewish Film Archive claim copyright, but John E. Allen, Inc. (at Library of Congress) has the only 35mm nitrate copy and it probably entered his collection before the Goskins give rights to NCJF and Spielberg.
Copied From
35mm; b/w
Film Source
John E. Allen, Inc.
File Number
Legacy Database File: 2681
Featured In
Permanent Exhibition - The Holocaust - Audiovisual Monitors: Before the Holocaust: - 4.07

Copyright
Hebrew University of Jerusalem
Conditions on Use
Third parties should contact the Spielberg Jewish Film Archive at jfa@savion.huji.ac.il for permission to reproduce and use the footage.
Record last modified: 2021-06-03 12:41:05
This page: https://collections.ushmm.org/search/catalog/irn1002059