From the opening titles of the film: "This film was made on the eve of the dissolution of one of the oldest Jewish communities in the Diaspora - the Jewish community of Morocco. Within a short time, ancient and established communities were rooted out: inhabitants of the mellah in the large cities, the kasbahs in the desert of the south, and the remote villages of the Atlast mountains. Via the camera we have attempted to perpetuate a way of life, the customs and mores of a splendid community seen in their Moroccan context, before the community moved on to its new-ancient homeland." 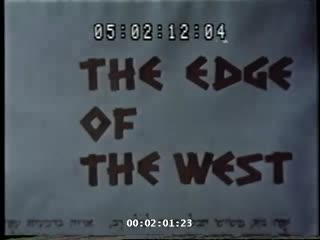 Film Title
Edge of the West