This version includes scenes from the children's production of "Brundibar."

Excerpts of well-known propaganda film made by the Nazis to show the International Red Cross and others that they were not mistreating Jews in the "ghettos." Documentary footage depicts the life of Jews in the ghetto of Theresienstadt [Terezin] in Czechoslovakia as harmonious and joyful. They wear yellow stars on their civilian clothing but are euphemistically called residents ["Bewohner"] instead of inmates. They look well-dressed and well-fed and keep smiling. No SS guards or other armed Germans are shown.

With English subtitles. Titles explaining the history of Terezin which include the number of people brought to the ghetto, how many died, and how many were sent to death camps. Film title "Theresienstadt" superimposed over orchestra scene. Audience, orchestra. Animation of the fortress city. 01:01:27 Narrator describes building the city of Theresienstadt. Several CUs of inmates playing chess, reading, and at leisure outside. Teens sitting together. Young women exercising. Man painting the landscape. Others outside - narration alludes that people happily relax on the fortress grounds in the sunshine. People sitting on benches or lying in the grass. MS, old woman winding yarn. INT, woman with yellow star on her jacket knitting, men playing chess in BG. More MSs of men playing chess. Teens running, outdoor soccer match, girls watch from the sidelines. 01:04:22 INT, operating room, surgeons working on a patient, surgical tools in FG. Patients in hospital beds, nurse and doctors walking among them. Narration alludes that the hospital is equipped with all necessary supplies. EXT, hospital patients lying in the shade as nurses attend to them. MSs, young women in beds, doctor writing notes. 01:05:13 EXT, building - narrator identifies it as a children's convalescent home on the city's fringes. Scenes of children gardening, eating bread with butter. Sign with two children: "Zum Spielplatz" [to the playground]. Children playing in a sandbox and wading pool. INT, children on rocking horses, several shots. Another child rolls a toy horse on wheels on a table.

01:07:14 Scenes from the children's production of "Brundibar." Children appear from behind one of the sets. Audience (mostly children). CU, boy sitting on the lap of a young woman. LS, children lined up on stage, the conductor is visible. MS, children singing the "victory song" at the end of the opera. Pan from right to left. The child with face-painted whiskers standing at right (next to child with a fake mustache) is Ela Weissberger. VAR, performers and the audience. Curtains close and audience claps. 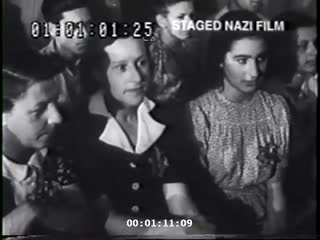 Legal Status
Permanent Collection
Film Provenance
The United States Holocaust Memorial Museum purchased this video collection from the National Center for Jewish Film for general reference in July 2000.
Note
Ludvik Kanturek was at Theresienstadt as a teenager and appears in this film.

Mimi Fischman Berger is the teenager sitting on the table at 00:24:26 with a writing pad (her hair is parted on the side and clipped). She was interred for 4 years in Terezin from ages 16-20. Mimi eventually immigrated to Palestine after the war because her father had arranged for a false marriage with an Orthodox Jewish family. They divorced immediately. Mimi became one of the first 12 flight attendants for El Al. You can learn more about her experience from her testimony: https://collections.ushmm.org/search/catalog/vha4080. Mimi's mother, Helena Fischman, is also in the film wearing a striped sweater and knitting while talking to another woman at the table in the barracks sequence. Helena was deported from Terezin not long after the making of this propaganda film and exterminated.

This VHS version includes "Staged Nazi Film" on screen in the top right corner throughout the duration of the film.

USHMM received a copy of this version in March 2006.

The full title of this film is: Theresienstadt: ein Dokumentarfilm aus dem Juedischen Siedlungsgebiet [Theresienstadt: a documentary film about the Jewish settlement]. The often-used title for this film is: Der Fuehrer schenkt den Juden eine Stadt [The Fuehrer gives the Jews a City].

Theresienstadt, established in November 1941, was the central ghetto for Jews from the Protectorate of Bohemia and Moravia. From July 1942 on, the ghetto also contained Jews decorated with German army medals as well as 'prominent' Jews and older Jews from several western European countries. It functioned as a transfer camp for deportations to the death camps in Poland and the occupied Soviet Union. After repeated requests by officials of the International Red Cross from October 1943 on, the SS agreed to allow a visit on June 23, 1944. Comprehensive 'beautification' measures took place in preparation for the visit in order to camouflage the ongoing mass murder of European Jewry to the world. Theresienstadt was presented as a 'model Jewish settlement.' Hans Guenther, the head of the regional SS-Zentralamt zur Regelung der Judenfrage [Central Office for the Regulation of the Jewish Question] in Prague, developed the idea to produce a movie depicting the 'excellent' living conditions for Jews in Theresienstadt (most probably in December 1943). The scenes in the film show camp life and feature the inmates in their day-to-day lives. Living conditions in Theresienstadt (and especially the efforts in education and culture organized by the Jewish council) were better on average than those in the Polish and Soviet ghettos. However, the movie crassly exaggerated the quality of life and omitted the harsh reality of overcrowding, hunger, diseases, and death that defined life in Theresienstadt.

Beside the cinematography, inmates of the ghetto were used in all functions (including the director Kurt Gerron) to produce the film under close supervision by the SS. Immediately after the end of shooting in September 1944, Gerron and other cast members were deported to Auschwitz where they perished. After the final cut on March 28, 1945 the Czech company Aktualita received RM 35,000 from Guenther's office for the production of the movie. The movie was intended to be screened to international audiences like the International Red Cross and the Vatican. Following the first screening in early April 1945 to high-ranking government and SS officials in Prague there were at least three more screenings to international humanitarian emissaries in Theresienstadt itself on April 6 and 16, 1945. Plans for a further distribution to broader audiences in the neutral states never materialized because of the progression of war.

Since 1945 no complete copy of the entire ninety minute film has been located. There are only fragments available at different archives. The infamous title "Der Fuehrer schenkt den Juden eine Stadt" ["The Fuehrer Donates a City to the Jews"] is not original - it was given by survivors of Theresienstadt in the aftermath.