MLS, panning shots of buildings, various architectural details. MLS, panning Tyn Church from across a large town square. MCU, local girl in traditional dress poses with a man in uniform. Ceremony at the National Memorial to the Heroes of the Heydrich Terror located at the Church of Saint Cyril and Saint Method (previously called the Carlo Boromeo Church). MS, large group of people gathered, men and women in line formation, young men in various uniforms carry various flags. Older men in civilian dress are also in formation. MLS, large group of nurses, in white uniforms, flanked by soldiers in uniform. MCU, three young girls in frilly, lacey white dresses with garlands of flowers in their hair and around their waists, young girl screen left is wrapped in a white shawl with black stripes at the border. LS, pan of people seated at ceremony, cut to soldiers in uniform standing in front of building and memorial. The building is draped in red cloth banners. VS, attendees at ceremony, MS wreath at foot of statue/stone plaque with inscription. MCU of soldiers and clergy standing together (presumably Catholic clergy, but this is not verified). Man in civilian dress speaks from podium that is draped in the flag of the Czechoslovak Republic, he is reading from index cards that he is holding very close to his face. VS, soldiers in uniform marching, placing large floral wreaths at the foot of memorial. Nurses, with Red Cross armbands follow with another large floral wreath, one bends down to kiss the ground. Clergy members place floral wreath. Soldiers marching with Czech flag, followed by fife and drum corps, various young men in various different dress uniforms, one group without jackets, only bright red shirts and ties. A variety of hats and berets accompany the uniforms. 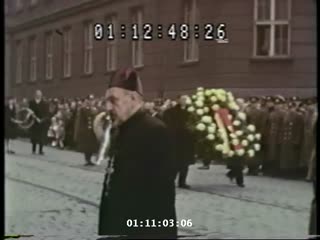 Legal Status
Permanent Collection
Film Provenance
The United States Holocaust Memorial Museum purchased this video collection from the National Center for Jewish Film for general reference in July 2000.
Note
The National Memorial to the Heroes of the Heydrich Terror was erected to commemorate the two Czech parachutists that were responsible for assassinating Heydrich in 1942. The plaque was most likely dedicated on October 28, 1947, and this footage may actually document that dedication ceremony.
Film Source
National Center for Jewish Film
File Number
Legacy Database File: 2717

Copyright
Copyright. National Center for Jewish Film
Conditions on Use
Contact NCJF at pontius@brandeis.edu for permission to reproduce and use this film.
Record last modified: 2020-02-04 10:39:39
This page: https://collections.ushmm.org/search/catalog/irn1002093