Notes from NCJF documentation: A group of people await the arrival of relatives and friends at the dock in Haifa. While they wait they share their stories. They represent the many different groups who came to Israel and the various and difficult adjustment problems they all faced, from those shared by the Yemenite Jews to those who came from Europe. The film is introduced by blowing the shofar, marking the beginning of the year 5721.

"THEODORE HERZL" ship docks in Haifa, Israel. Immigrants getting off ship with nothing but "a lump in their throat and hope in their heart." People waiting for relatives and friends. Jews in Yemen, view of fort-like city in the desert, people being airlifted to Israel. "To be a Jew in Yemen was being lower than a donkey" Jew is seen being beaten with a stick, Jews could hold only the most meaningless jobs, i.e. street cleaners. Old Jewish man studying the Torah with children (one of them learned to read upside down because that was his established spot in the circle). 45,000 Jews walked over a period of two years to be airlifted to Israel. Faces in the airplane. View of Haifa. Sign reads: "UJA TA'OZ" Keren Hayesod, farming settlement. Yemenite Jews learning how to farm, learn how to eat with utensils and sleep in beds, get medical care. Staged episode: scene between newlyweds, arguing over the place and status of a married woman, problems facing a new generation. Rows of identical houses, people moving in. Unidentified displaced persons camp, people behind barbed wire fences, walking, sitting, cooking on small open fires. Ship carrying immigrants entering Haifa Bay "To reach the dock is only the beginning." Tent city (unidentified), food line. People waiting, waving to people arriving on ship, CU of faces. Processing IDs at dock. Morris W. Berinstein, General Chairman, UJA. 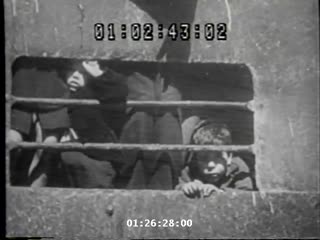 Copyright
Copyright. American Jewish Joint Distribution Committee
Conditions on Use
The American Jewish Joint Distribution Committee (JDC) (archives@jdc.org) film materials are on permanent loan to the National Center for Jewish Film (pontius@brandeis.edu) from whom the materials can be licensed.
Record last modified: 2020-08-04 09:20:52
This page: https://collections.ushmm.org/search/catalog/irn1002100