Notes taken from NCJF documentation: The film provides a rare look inside DP camps, the crowded living conditions, the lack of activity, the new generation born in the camps, and the attempt at creating some normalcy under difficult conditions. 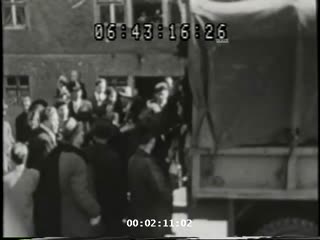 Legal Status
Permanent Collection
Film Provenance
The United States Holocaust Memorial Museum purchased this video collection from the National Center for Jewish Film for general reference in July 2000.
Note
This film was viewed by Mr. Akiba Kohane, head of JDC Poland, in September 1988 at NCJF. He was able to identify people and places he was personally familiar with. The footage was taken in Germany and/or Austria as identified by the JDC patch on the uniforms of personnel (the uniforms were worn only in those two countries). Location is likely Munich.
Copied From
16mm, b/w, reversal
Film Source
National Center for Jewish Film
File Number
Legacy Database File: 2755
Source Archive Number: Untitled #235

Copyright
Copyright. American Jewish Joint Distribution Committee
Conditions on Use
The American Jewish Joint Distribution Committee (JDC) (archives@jdc.org) film materials are on permanent loan to the National Center for Jewish Film (pontius@brandeis.edu) from whom the materials can be licensed.
Record last modified: 2020-02-04 10:39:40
This page: https://collections.ushmm.org/search/catalog/irn1002102