War Crimes Trials, Nuremberg, Germany, July 1946. SEQ: standing before photo mural of the Nuremberg Trial in session, Commander Steer of the US Navy explains the operation of the Multilingual Simultaneous Interpreting System. (Photography is bad in spots.) 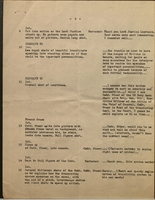