01:33:02 An illustration shows how factory workers spend a majority of their time (from 6 am until 8 pm) indoors. Title cards read: "Die durch unsere heutige Lebensweise entstandenen," "Schaden mussen ausgeglichen warden!" "Durch:" and, "Körper pflege." [Personal hygiene] A man stands shirtless in front of a mirror and washes his hands in a water basin. He lathers his face and torso with soap, then rinses off under a shower.

01:35:15 Text states, "Leibesübungen." [Physical exercise/gymnastics] Rows of women wearing work out uniforms do stretches in unison. Men and women stand in circles and pass a large ball from one person to the next. The men wear shorts and the women are dressed in a two piece outfit. They run in a large group through the woods and towards the camera. City requires care of the body to balance, i.e., more hygiene for the Volk.

01:36:17 Text reads, "Genügend freizeit" [Enough free time] and "Aber nicht so." [But not so] Merging and overlying images show examples of people socializing, such as: gambling, drinking, dancing, and smoking. Title card states, "Sondern so" [Instead] and two people canoe on a peaceful lake. Boys walk outdoors, a man and woman wash pots in a stream and someone reads aloud to people sitting around a table.

01:37:02 Title card reads, "Wohnungshygiene." [House hygiene] WS of a large building. People sit on a patio, an elderly couple garden and children play in the yard as someone picks fruit from a tree. Text states, "Neue Schwierigkeiten entstehen, weil die Frau außerhäuslich tätig sein muß!" [New difficulties arise because the women must work outside the house] A woman kisses her two children on the head, waves goodbye and walks out of their flat. Once the door closes, the children begin to pull each other’s hair. Kids stand in an alley and appear to take bets. Women are shown working in factories and offices.

01:38:43 Title cards read, "Ausgleich der neuen Schaden durch:" and "Unterbrechung der Arbeitszeit durch GYMNASTIK." People walk around on the roof of a building. Women wearing bra tops and shorts exercise together. Text reads: "Den werdenden Müttern hilft die REICHS WOCHENHILFE," "6 wochen bezahlter urlaub," [6 weeks of maternity leave] and "Aufsicht und Anleitung der Kinder im KINDERGARTEN." [Supervision and guidance of children in Kindergarten] Children sit around a small table and play with blocks and puzzles as a teacher looks on. CU of little girl as she puts blocks in corresponding holes. One child wipes a table as another sweeps. They get cups with toothbrushes, brush their teeth, and wash their faces and hands.

01:42:30 Title card reads, "Das enge Zusammen = wohen der Großstädter vergrößert die Gefahr der SEUCHEN." Aerial shot of a city is has an image of flowing water superimposed over it. Title cards have blurred edges and side- scrolling text lists: "Grippe," [Flu] "Typhus," and "Tuberkulose." Overcrowding, danger of contagious diseases. A Red Cross symbol transitions into a shot of ambulances driving past the camera.

01:43:21 Text reads, "Den Erkrankten wird Schutz und Pflege zuteil im MODERNEN KRANKENHAUS." Panning shot of a large hospital building. Pan down hospital balconies showing nurses tending to patients outdoors. A boy sits up in bed as a doctor places a stethoscope to his back. A scientist transfers liquids from a dropper into test tubes. He places the liquid on a slide and inspects it under a microscope. 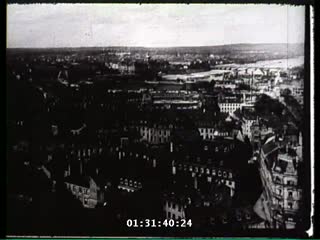