Turning to the West Front, the narrator says that Globke worked with the Alsatian "fifth column" against France. The leader of the Alsatian Nazis was Karl Roos, who was executed by the French in February 1940. A photogaph shows Frick with Globke, Stuckart, and others among a group of Alsatian Nazis who had been confederates of Roos. Footage of Hitler arriving at the train car at Compiegne (surrender of France). Globke earns another medal for his service in France. Imposition of the anti-Jewish measures in France and Holland. A quotation from a survivor over footage of the Warsaw ghetto (street scenes, interiors with indigent children, thin, naked men in the baths, corpses buried in mass graves). 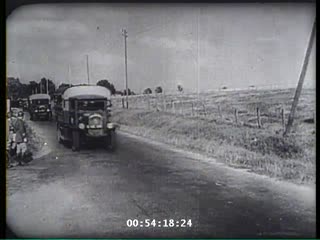