Transcarpathia travelogue (Hungarian Production). Bucolic scenery: stream, bridge, horse drawn cart. Cameraman in an open cart, filming as the cart rolls by [early form of tracking shot; he is using a hand-cranked camera]. Scene of a village, with wooden buildings, including huts with thatched roofs and a church with an onion dome. A group of women in shawls walks by, cut to a small procession of wagons bearing peasant men in traditional dress. Village square, where people appear to be gathering, perhaps for some sort of festivity. CU of a young girl in embroidered peasant shirt, petting a kitten. Women singing and doing embroidery, first outside, then inside a home. A sign post reads: "HOVERLA 17km; PICTROS 224km; KOROSMEZOE (with arrow pointing screen left); BALCATUL 19km; STOHOVEC 10km (with arrow pointing screen right)". 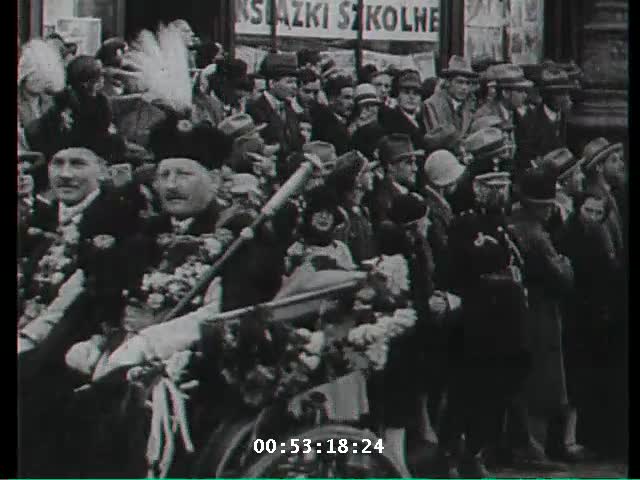 Film Title
By Car Through Transcarpathia

Legal Status
Permanent Collection
Film Provenance
The United States Holocaust Memorial Museum purchased this collection of moving image segments from the Central State Film, Photo and Sound Archive at the Ukraine National Archives in Kiev, Ukraine in 2001.
Note
Madeline Albright's (Secretary of State under President Clinton) hometown is featured in this travelogue. Hoverla is the highest mountain in the Carpathians. Korosmezo was the point of deportation of Hungarian Jews at the northern Polish border where 17,000-20,000 Jews were deported.
Copied From
35mm.
Film Source
Central State Film and Photo Archive of Ukraine
File Number
Legacy Database File: 3427
Source Archive Number: 6396