First days of German occupation of Kyiv [Kiev]. People in horse-drawn carts on a country road; perhaps they are peasants, perhaps they are Kievans fleeing their city. Train. Droves of people traveling along a country road, carrying sacks and leading mules and horses drawing carts loaded with their possessions (likely fleeing the German presence with their belongings). Germans in the streets of Kyiv, soldiers and tanks on the move. Fires burning, smoldering ashes and embers. Soviet soldiers surrender in the field to German soldiers with guns. Hundreds, perhaps thousands of Red Army soldiers are marched along a country road after surrendering. In Kiev: a wounded soldier with a bandaged head sits, leaning against a fence or staircase on the street. Civilians move about as the German military increases its presence, moving tanks and artillery into the city. Church grotesques, including a Madonna and child. A Nazi flag flies atop a church spire, possibly from the Church of Dormition in the Kiev Pechersk Lavra (Monastery). German soldiers salute. Elderly Ukrainian women crossing themselves. The lavra's campanile. CU, newspaper headlines, which read : "Kyiv liberated from Bolsheviks. Kiev in German hands. Poltava in German hands". AVs of the city, with troops visible. A leaflet on the wall says, "Kyiv has been liberated from a Bolshevik horde." A destroyed bridge, cows being trucked through the city. A crowd watches a Ukrainian woman hanging a poster of Hitler onto a shop window. Street sign in both Ukrainian and German, with a German name: Eichhornstrasse (Eichhorn St.). This is notable, as it is, in fact, Khreschatyk, the main street of Kiev, renamed by the German occupying force in honor of Hermann von Eichhorn, a WWI-era field marshal who commanded German troops in the Ukraine, and was assassinated by Ukrainian revolutionaries in Kiev, 1918. Another street sign reads "Von Schleifer Platz" (Von Schleifer Square). This is a square in Kiev which was named Spartacus Square under the Soviets (Spartacus was a popular Communist hero for having led a slave rebellion). It was renamed Von Schleifer Platz by the Germans, and is currently named Ivan Franko Square, after the Ukrainian national writer. Signs appear in German on several storefronts. German soldiers sitting outside, then standing next to a crowd of Kievans who seem to be surrendering (they have their hands up). Still of corpse lying in the street, followed by still of man hanging in town square (Ukrainian nationalist?). Two soldiers hanging with a sign, in Ukrainian, reading: "Penalty for taking a German soldier's helmet from his grave." German soldiers killed in action often had their helmets placed over their gravestones when buried.

Translation of narration:
Stalin refuses to surrender Kyiv. Zhukov has been dismissed for supporting the idea of surrender. Khrushchev persuades Kyiv citizens that there is no reason to be afraid: the Red Army would not leave the city. People believed him. They had no choice; otherwise they would be punished for being frightened.

[Narration is interrupted by a WWII Red Army soldier (he is speaking Russian)], "Fights started in the suburbs of Kiev. Everything came to its end on September 18, when we got an order to leave the city."

[Narration proceeds with the story about the Germans filming the Red Army surrender in order to reveal the hypocrisy of the Soviet leaders who used to claim that the Red Army was the most powerful army in the world.] The Germans made sure of showing their documentary everywhere to cause fear and shock among people.

[Narration is interrupted by a German report.]

[The narrator stresses the tragic difference between the pre-war Soviet propaganda with its eulogy of the Red Army, which was believed to be the strongest in the world.] All those pre-war parades and demonstrations that aimed to show the world the Red Army strength ended in 650 thousand soldiers being captured by the Germans during the very first days of the war.

The first days of the 770 days of occupation were most tragic for Kyiv residents. Until the last moment they all hoped that the fascists would not enter the city. They hoped not because of numerous posters and slogans, but because it was difficult to believe that the conquerors would become the masters of the city. No one could imagine what life would be like under a new regime [in original language the literal translation is "un-freedom" instead of "regime"]. We all got used to life under the previous rule [the Soviet rule] and even called ourselves "happy."

A woman is speaking, "You know, I felt something had happened in the city, but..."

Fascists hoped to stay in Kyiv forever; therefore there must be order in the city, a new order. They started with renaming streets and squares. A new order had to be everywhere, including the question of nationality. They needed an enemy, a transparent and well-known enemy. Fascists perceived of Jews as such an enemy. How should Jews be treated? In his letter Goering gives instructions, "It is too much of an honor for Jews to be executed by shooting. They must be hanged." 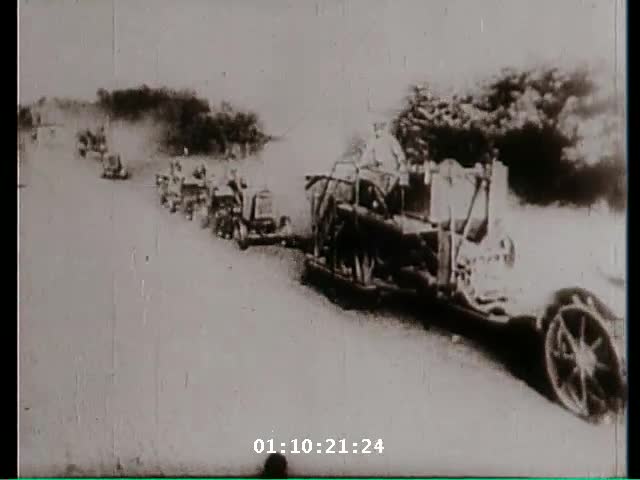 Film Title
The Truth About Tragedy

Khrushchev Nikita Sergeevich, 1894-1971, during World War II, the first Secretary of the Central Committee of the Communist Party of Ukraine

Legal Status
Permanent Collection
Film Provenance
The United States Holocaust Memorial Museum purchased this collection of moving image segments from the Central State Film, Photo and Sound Archive at the Ukraine National Archives in Kiev, Ukraine in 2001.
Note
The story picks up from Story 3127, Film ID 2488.
Geographic terminology note: The city of Kyiv is spelled as such when the language being spoken is Ukrainian, when Russian is being spoken, the city is spelled Kiev. This highlights the distinction between the two languages and pronunciations.
Copied From
35mm.
Film Source
Central State Film and Photo Archive of Ukraine (TSDKFFA)
File Number
Legacy Database File: 3432
Source Archive Number: 11873 Reel II