A parade is organized to send the newly-formed Waffen SS Galizien Division off for training. Large crowds attend, and a farewell speech is given by Dr. Otto von Wächter, the German governor of Galicia, in Lvov, Poland. This likely takes place in the summer of 1943, though the troops did not see action until early 1944. Ukrainian soldiers are presented with flowers by Ukrainian women in traditional dress. There is a clear display of Ukrainian folk-nationalism alongside the Nazi pageantry (though the Germans were wary of emphasizing or endorsing Ukrainian nationalism beyond what was practical for their purposes). Large crowds gather in the city square to bid the recruits farewell. CUs, faces in the crowd. Several Nazi flags are flying over the square. Young men march in formation, most in civilian clothes, as they have just volunteered for military service. New recruits board trains for journey to the front, and receive a huge send-off from fellow Ukrainians. The Galician SS Division would later go on destroy a few Polish villages in Galicia, and then to help quell uprisings in Yugoslavia and Slovakia.

Celebration in front of the Lviv theatre.

One more train with volunteers is leaving. Upon their return they will fight together with Germans to protect Europe against the Bolshevik enemies. 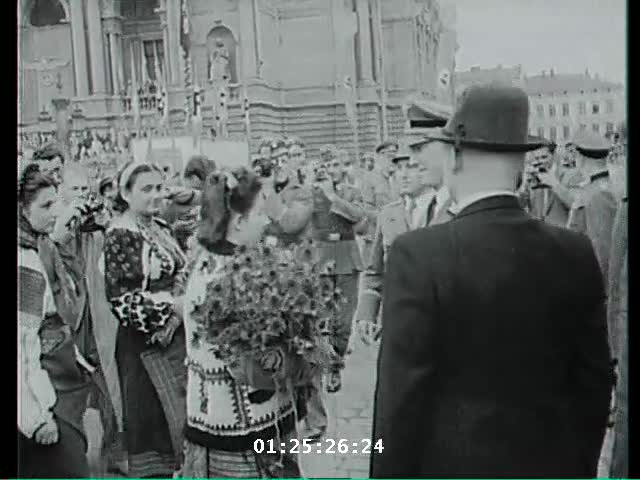 Legal Status
Permanent Collection
Film Provenance
The United States Holocaust Memorial Museum purchased this collection of moving image segments from the Central State Film, Photo and Sound Archive at the Ukraine National Archives in Kiev, Ukraine in 2001.
Note
Partial duplicate footage on Story 3162, Film ID 2489. but with very different narration, the comments are virtually opposite.
SS-Galicia Waffen: Waffen-Grenadier-Division der SS "Galizien" (also known as the 1st Ukrainian Division of the Ukrainian National Army). In 1943/1944 a determined group of young men and women in Galicia - the western area of the Ukraine that borders Poland - volunteered to serve in a combat division destined for eastern front combat. Their goal: to engage and destroy the Soviet hordes menacing their homeland and to counter Nazi Germany's subjugation of their country. Although initially Galicia's volunteers would serve in a German sponsored military formation, in actuality the volunteers of the Galicia division wanted to engage all hostile ideologies - both from the east and west - in order to secure a free independent Ukraine.

The Waffen SS Division Galizien was formed in 1943 in response to the German defeat at Stalingrad. Previously, Slavs were seen as an inferior race, unfit for the German ranks. Now on the retreat, however, the Wehrmacht was less particular about its recruits. Some 80 thousand Galicians volunteered; roughly 30,000 were accepted, but only 11,600 were actually trained. Many of these volunteers were members of, or at least encouraged by, the Organization of Ukrainian Nationalists (OUN), Mel'nyk faction. The OUN had splintered in 1941 into two bitterly opposed factions: OUN-Bandera (after its first leader, Stepan Bandera) and OUN-Mel'nyk (after its first leader, Andrii Mel'nyk). The OUN-Bandera was opposed to both Soviet and German occupation of Ukraine, and had as its aim the elimination of all Poles from "Ukrainian" territory, and the ultimate establishment of a Ukrainian nation. To this end, the Banderists formed the Ukrainian Insurgent Army (UPA), which was involved in wholesale slaughter of Poles (and others) throughout Galicia and Volhynia. The OUN-Mel'nyk, on the other hand, saw collaboration with Germany as adjunct to its plans: preventing Soviet occupation, and ensuring that Galicia and Volhynia ended up in Ukrainian, and not Polish, hands. Thus, many volunteered to serve in the SS,
Copied From
35mm
Film Source
Central State Film and Photo Archive of Ukraine (TSDKFFA)
File Number
Legacy Database File: 3439
Source Archive Number: 3266