Soviets citizens* (see Notes field) deported to Germany (Lemnitz). Scenes of river boats with Nazi flags on them, heading down river, full of mainly children. People are smiling, waving. Children run alongside the banks of the river smiling and waving as the boats head downstream. VS, children along the banks of river, waving, cut to LS of people in the boats waving back at them. MCU, children on the boat, singing with accordion accompaniment. Pans of countryside along the river banks. MCU of young girl taking photographs of the countryside from the window of the boat.

Translation of Ukrainian narration:
Though the scope of work for the National-Social People's Stewardship Organization has expanded dramatically since the war began, it nevertheless still succeeds in fulfilling its goals. Here is a transport of children leaving the German capital. Children are taking boats to go to the Baltic seaside for a couple of weeks vacation. 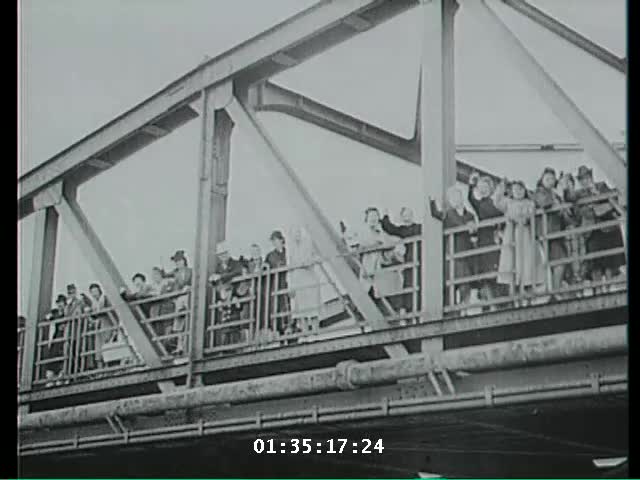 Legal Status
Permanent Collection
Film Provenance
The United States Holocaust Memorial Museum purchased this collection of moving image segments from the Central State Film, Photo and Sound Archive at the Ukraine National Archives in Kiev, Ukraine in 2001.
Note
It is possible that these are not deported Soviet citizens since they are singing joyously. Perhaps, this was some sort of Volksdeutsche program for children, or perhaps these are native German citizens? Needs to be confirmed.
Copied From
35mm
Film Source
Central State Film and Photo Archive of Ukraine (TSDKFFA)
File Number
Legacy Database File: 3444
Source Archive Number: 3276