Workers of Donbas (Ukraine) deported* to Germany. VS, men being transported by bus to Germany. They are escorted off the bus by uniformed military personnel. They are escorted to their new living quarters and then to the factory. MS, several workers in an open rail car in what seems to be a miners' tunnel, the car exits the tunnel and the men jump out of the car, they are all carrying flashlights and wearing work clothes. Men being escorted around the grounds of a factory by soldiers, the men are dressed in suits and almost all are wearing caps. Workers and a man in uniform seated around a large table. They are eating, drinking, talking, smoking, laughing, etc. Workers stand around a garden plot, watching as someone demonstrates planting techniques. Young children playing in a field, young women are playing with them, man stands around watching the children dance in a circle. MLS of the men, women and children, arm in arm making a circle.

Translation of Ukrainian narration:
A group of mining engineers and workers from Donbas [a mining region in Ukraine] have been invited by their German colleagues to visit German mining enterprises. The Head of one of the German mines welcomes them. A visit to the underground places of work comes to its end. After the mining dust guests get a glass of great beer.

Not far from the factory workers have their own gardens where they plant and grow vegetables in their spare time.

The factory also has its own kindergarten. Children are happy and healthy and very soon they become friends with their foreign guests. 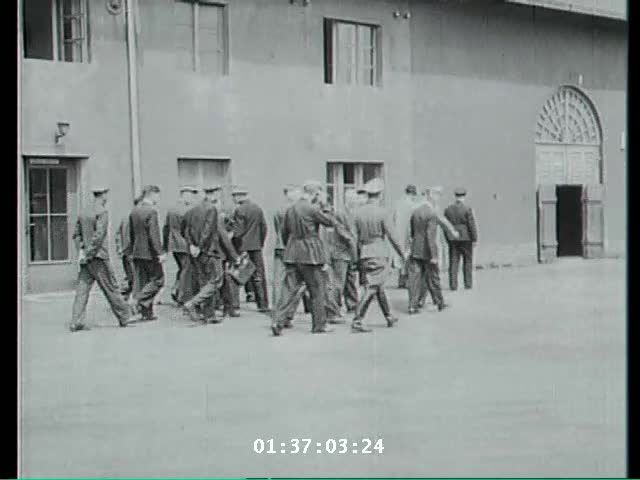 It's unclear whether these men were deported or simply visiting Germany of their own volition on some sort of work program. The narrator says the latter, though that could simply be fabrication for propagandistic purposes.
Copied From
35mm.
Film Source
Central State Film, Photo & Sound Archives
File Number
Legacy Database File: 3445
Source Archive Number: 3277