"ATARKIIGAZITAS: Honvedeinket lelkesen fogadtak a magyar-cseh-szlovak hatarmegallapito bizottsag dontese alapjan visszacsatolt kozsegekben." MS, military officers shake hands, CU of one of the officers looking through the viewfinder of a still camera. MLS, soldiers marching wheeling bicycles beside them. MLS, official speaking, surrounded by locals, men women and children stand on the balcony with him. VS, crowd, a mix of soldiers and civilians, camera focuses on members of the audience, some WWI veterans wearing badges/medals. A uniformed soldier steps to the podium and addresses the crowd. CU, large photo on a wall of a military officer in his dress uniform, cut back to crowd and speeches. MS, men on horseback, moving toward camera. The horses are decorated with garlands. Parade, troops march down the street, flags and marching band, followed by units on bicycles, carrying their gear. Crowds of civilians line the route and wave flags. VS, countryside, region, castle in BG in one shot. VS, military officers, soldiers, banner, CU on a crucifix. Border sign, reads: "MISTNI OBEC: VERBJAZ" VS, winter, soldiers marching through knee deep snow. VS, soldier standing guard at border crossing. Soldiers marching through town on foot, civilians line their path and wave. 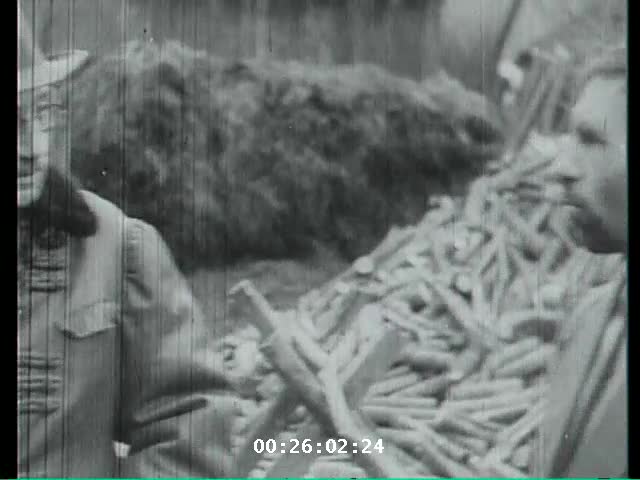 Legal Status
Permanent Collection
Film Provenance
The United States Holocaust Memorial Museum purchased this collection of moving image segments from the Central State Film, Photo and Sound Archive at the Ukraine National Archives in Kiev, Ukraine in 2001.
Note
Geographic location: Some of the footage may have been shot in Uzghorod. From May 1919 till 1938 this town belonged to Czechoslovakia. From 1938-1944 it was occupied by Hungary. In 1944 the Soviet Army "liberated" it and Uzhgorod joined Soviet Ukraine. Since that time it has been a Ukrainian city. Munkacs belonged to Czechoslovakia until 1938, and in 1938 it was occupied by Hungary. The Soviet Army also liberated it in 1944, and in 1945 it joined Soviet Ukraine. The Ukrainian spelling of this town is "Mukachiv."
Copied From
35mm
Film Source
Central State Film, Photo & Sound Archives
File Number
Legacy Database File: 3461
Source Archive Number: 6395 Reel I