"Extra! - Democracy Faces the Job - Roosevelt's Historic Report!" Sync of FDR's "Four Freedoms" speech. Congress hears FDR on: 1. Threat To America; 2. All-Out Aid To Democracies; 3. Billions In Arms Loans; 4. Four Essential World Aims. FDR speaking: "It is untrue that an unprepared America can hold off the whole world. On appeasement tactics: such a peace would bring us security; we cannot afford to be soft-hearted. On US defense problem: I am not satisfied with the progress made thus far; the men in charge of the program...are not satisfied; none of us will be until the job is done. On aid for democracies abroad: I ask this Congress for authority and funds to manufacture munitions for those nations at war the aggressors. They do not need manpower; they need billions worth of defense weapons. I do not recommend that we make a loan, to be repaid in dollars. We shall be repaid in similar materials or in other goods which we need....I called for personal sacrifices; partly a sacrifice in paying more taxes; no person should try or be allowed to get rich on this program....In fulfillment of this purpose we will not be intimidated by threats of dictators. Such aid is not an act of war, even should a dictator unilaterally proclaim it so to be. The dictators will not wait for an act of war on our part to wage war against us. Four essential world aims: the first is freedom of speech and expression everywhere in the world; the second, is freedom of worship; third, freedom from want, which means a world-wide reduction of armaments. Freedom means the supremacy of human rights everywhere. Our support goes to those who struggle to gain those rights or keep them. Our strength is in our unity of purpose." View of joint session of congress, crowd. 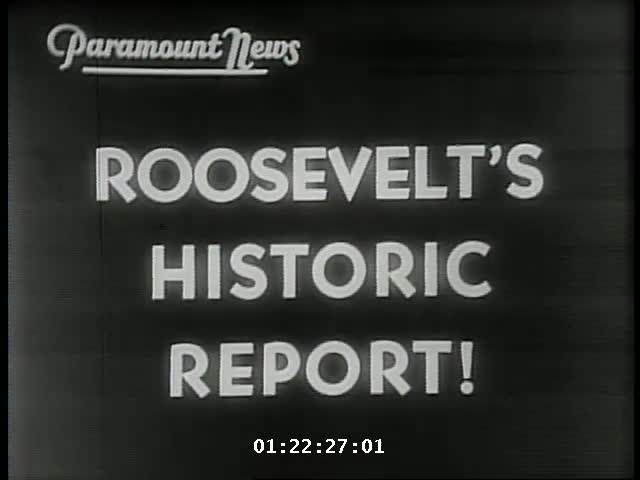