FDR at the polls

"New Deal Dominates America" Hyde Park, NY; New York City, NY; Pennsylvania. Cartoon (from the library) of Uncle Sam at the crossroads. Good shots of FDR at the polls, giving his name to the registrar. CUs, Mrs. James Roosevelt, his mother. Casting their votes for Gov. Lehman. Shot of citizens lined up at the polls. CU, electioneering sign. Map showing how FDR carried all but the six shaded states in 1932, whereas today, other states have swung toward the New Deal. CU, Senator David A. Reed, Republican spokesman, and CU of New Dealer Joseph A. Guffey who defeated him. This was a blow to conservatives. CUs, Upton Sinclair, and Governor Merriam who defeated him. This was a blow to radicals. Successive CUs of Senator Robert la Follette and Governor Philip la Follette, both of the progressive party, which won out in the once republican Wisconsin. INT, Congress in session. CU of National Democratic Chairman Farley analyzing FDR's triumph, since he is assured of a two-thirds majority in the house. CU, President Franklin D. Roosevelt. 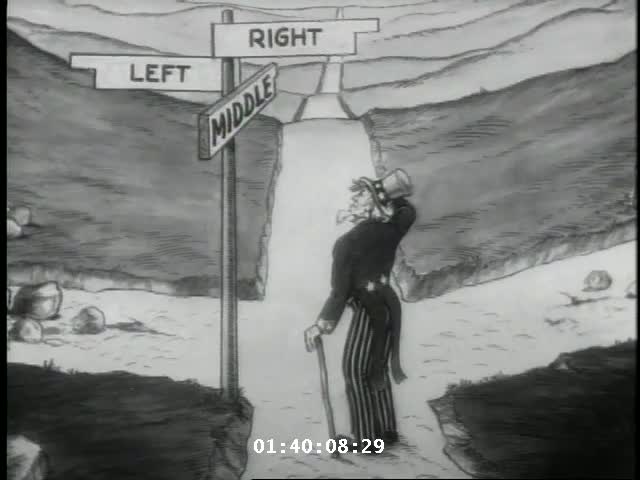