"Four Freedoms Set Key for Bond Drive" Arlington, VT; Guadalcanal, Solomon Islands; Denver, CO; Winter Park, CO; Washington, DC. America digs in to complete $13,000,000,000 second war bond drive, greatest financial undertaking in history of the world. Paramount news presents inside story of first sales of new issue, human-interest pictures of Mr. Roosevelt and White House staff. Start of the campaign! Artist Norman Rockwell's paintings of America's great four freedoms, background theme of second war bond issue. Vermont: Norman Rockwell with models and paintings of "Freedom from Want"; "Freedom of Speech"; "Freedom from Fear"; and "Freedom of Religion" posters. INT, presses, posters passing through press. White house, INT, FDR, seated at desk; Secretary of the Treasury, Henry Morgenthau, jr., and other White House employees standing around president. CU, Morgenthau speaking: "Mr. President, the treasury department is offering the people of America the opportunity to lend their support to our fighting men." FDR speaking: "Mr. Secretary, this is just a small cross-section of the White House staff; but we, like a great many other American houses, each of us has got some member of the family in the fighting forces of the United States, and we, back home, are trying to do our bit, too." Scenes of Guadalcanal. World's largest army hospital somewhere in the US. Man selling bonds in snow. Washington, DC, White House staff, buying bonds from Pres. Roosevelt. CU, poster "The 2nd war lean is on! They give their lives--you lend your money." 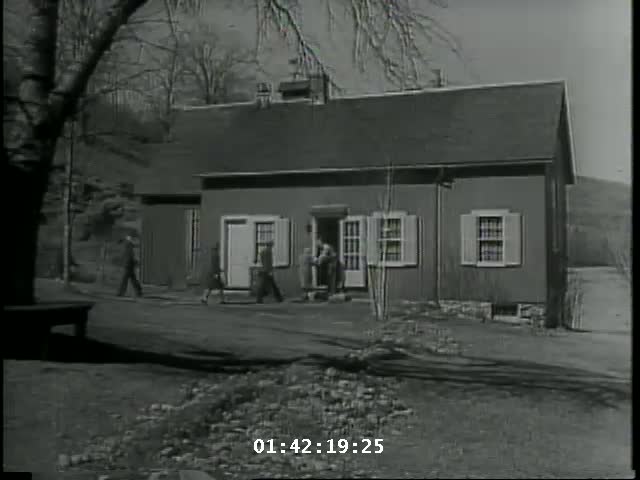