Men in civilian clothing carry swastika and SS banners. These are Ukrainian volunteers for the Galician Division of the SS. Swastikas, religious blessing of units. The SS group - stills, published photos, and art work. Parade, men carrying large signs and banners with the symbol of the SS Galiciana unit. Railroad car with SS chalked on the side, close scene, men in the rail car.

Translation of Ukrainian narration:
SS... Entire classes of students from the theological seminary* and academy were sent here. The Soviet army totally smashed these warriors near Brody. They moved no further than 100 kilometers from Lviv. [The battle near Brody (Western Ukraine) was one of the worst battles during World War II for the SS-Galicia unit. Soviet general Zhukov literally destroyed almost the entire unit. The battle ended on July 23 1944.]

These homeland betrayers, educated by the nationalists, deceived by the Uniate Church, would never ever see their homes again. Forever they will wonder under a foreign sky. [Ukrainian Uniate Church - official title Ukrainian Greek Catholic Church - was created in 1596 as a gesture of refusal to accept the jurisdiction of a newly formed Moscow patriarchate. Throughout its history the Church remained a guardian of Ukrainian language, culture, and tradition. During WWII the Church hierarchy was very active in the underground movement for liberation.]

*The Ukrainian Greek Catholic Church's Metropolite Andrei Sheptytsky supported the creation of the SS Galizien, as he saw it as a potential progenitor of a Ukrainian national army, should an independent Ukraine be established following the war. 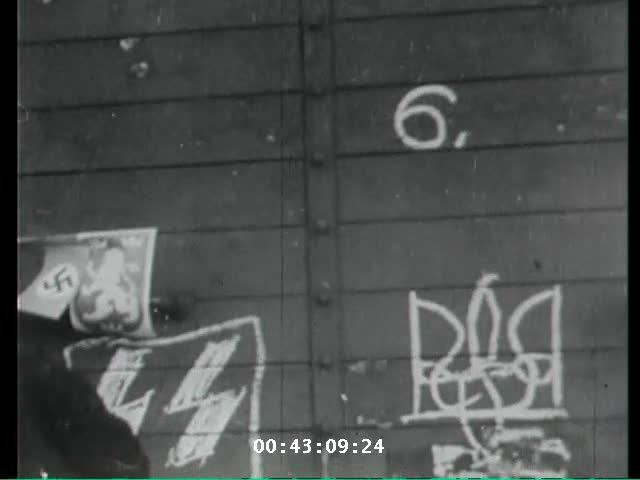 Legal Status
Permanent Collection
Film Provenance
The United States Holocaust Memorial Museum purchased this collection of moving image segments from the Central State Film, Photo and Sound Archive at the Ukraine National Archives in Kiev, Ukraine in 2001.
Note
Partial duplicate footage on Story 3135, Film ID 2488. but with very different narration, the comments are virtually opposite. This commentary is pro-Soviet, and the members of the SS-Galicia Waffen are portrayed as homeland betrayers.
SS-Galicia Waffen: Waffen-Grenadier-Division der SS "Galizien" (also known as the 1st Ukrainian Division of the Ukrainian National Army). In 1943/1944 a determined group of young men and women in Galicia - the western area of the Ukraine that borders Poland - volunteered to serve in a combat division destined for eastern front combat. Their goal: to engage and destroy the Soviet hordes menacing their homeland and to counter Nazi Germany's subjugation of their country. Although initially Galicia's volunteers would serve in a German sponsored military formation, in actuality the volunteers of the Galicia division wanted to engage all hostile ideologies - both from the east and west - in order to secure a free independent Ukraine.
Copied From
35mm
Film Source
Central State Film and Photo Archive of Ukraine (TSDKFFA)
File Number
Legacy Database File: 3527
Source Archive Number: 4492 Reel II