Silent film with French intertitles. Synagogue of Demijevka after it has been destroyed. The Torah has been desecrated. VS, all stills, of the INT of the synagogue, Torah scrolls are unspooled on the ground, the Jewish male elders are picking up the pieces, image of the altar turned upside down, etc. "Des juifs tues et assassins" "Des victimes jetees au Dnjepr par les bandits. Meschigorie (Dep. de Kieff)." Various stills of the burned victims' bodies, they are lying in rubble. "Les massacres a' Jitomir." Various stills of the bodies of the massacred victims, laid out in a circle and men standing above them, CU dead man, wrapped in a prayer shawl. Still of women, with their heads covered looking at the victims' bodies. "Les victimes a la maison mortuaire (Jelisavetgrad)." Still of more victims' bodies, an elderly man among them. "Victimes de pogrome. Blesses et refugies. Au refuge." Stills of several survivors of the pogrom, with their heads wrapped in bandages - one of men, another of women. Still of woman curled up on a hospital bed; there is no mattress, she lies directly on the stretcher/frame. More stills of a larger group of survivors, women and children among them. A large group portrait outside of the shelter where they sought refuge.

"Le pogrome a' Tcherkassy (Dep. de Kieff)." "Le premier pogrom fait par l'ataman Grigoriew, Mai 1919. Ataman Nikifor Grigoriev was a Ukrainian partisan leader who sided, at various times, with the White Army (the tsarists), the Red Army (the Bolsheviks), the Black Army (Makhno's anarchists), and the Green Army (an armed peasant movement) during the Russian Civil War. He was as well-known for his virulent anti-Semitism and pogroms as he was for his unflinching loyalty. "Dans ce pogrome 617 juifs ont ete' massacres." "Le place du marche' ille' par les bandits." Moving images, MS, young boys going through the ruins and rubble after a pogrom, trying to salvage anything of value. MS, destroyed street in the town (old market?) some men in long black coats in the BG. "Une boutique demolie et depouillee." VS, a destroyed storefront, several young children enter through a broken doorway in search of valuables in the rubble. "La rue principale de Tcherkassy apres le pogrome." LS, pans the main street as young and old walk about through the rubble, several damaged storefronts are visible, no shops are open for business, people wander somewhat aimlessly. "Les victimes du pogrome a la station du chemin de fer. Plusieurs juifs ont ete massacrees et jetes dans un puit." MS, HA, bodies of the victims, being moved by Russian soldiers with shovel, they are flipping some of the bodies over. A soldier removes a ring from the finger of a corpse. One man with a shovel glances at the camera. The bodies are being placed in graves. "On apporte les corps au cimetiere." VS, bodies are removed from the scene of the massacre, placed on wagons and brought to the cemetery. Some women stand on the side lines as the men carry the bodies. Bodies are lying, deteriorating in an open field. The soldiers load them onto carts to be transported to a cemetery. "Au cimitiere. Les parents cherchent leurs proches parmi les morts. Une mere qui reconnait ses enfants tues." Scene at the cemetery, mothers and wives, weeping, walking among the bodies that have been laid out, looking for family members who were killed. There is much confusion and distress, some children are seen wandering among the rows of corpses in search of family members. Some women carry away bundles. "Le corps d'un jeune homme assassine'." CU, body of a young man (one of the killers). "Le corps d'une femme massacree'." CU of the body of a young woman (one of the victims). "Une famille de sept personnes massacrees. Il garcon, le seul de la famille, qui echappa a la mort, et devenu fou d'horreur et de peur." MCU of more bodies at the cemetery. 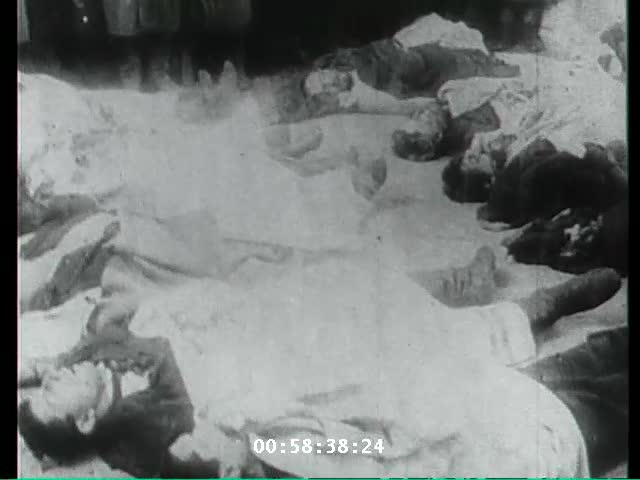