Kiev: the last days before war

Various scenes of the last days before war in Kiev. VS, main street of Kiev, people go about daily business, a soldier stands with a gun on a street corner, a newspaper is shown, dated September 1941. In the newspaper there is a war-propaganda picture featuring soldiers and workers alike defending their homes, with a caption that reads "All to the defense of Kiev!" German tanks and heavy artillery roll into town, Wehrmacht soldiers in uniform lounge about, smoking. CU of official letter, in Ukrainian, from German military authority with regulations. A large building is shown with a swastika banner draped down its façade: Kiev is under German control. Shot of the library on Kirov Street, the new Einsatz headquarters. A list of paintings taken by the Germans is shown. Stills of hangings, POWs. Kiev burns: retreating Nazis detonate explosives, destroying as many buildings and kill as many people as they can.VS of a field of bodies, faces of corpses.

01:09:47 VS of defense lines in Kiev. CU of women reading a poster on the street: "Report from the front lines of the Great Patriotic War" [WWII] VS of Kiev streets with cars, civilians walking, policemen controlling traffic. A postman delivers mail to the door. [Similar to Story 3128, Film ID 2488 but the headlines are different. Story 3128 is about Kiev being liberated from the Bolsheviks, these are about the heroic deeds of Soviet soldiers.] CU newspaper articles with headlines: "Serve the Interests of the Front for the Victory over Bloody Fascism"Defenders of the homeland," "Communists are at the head of defense works." A longer excerpt reads: "Our homeland's valiant defenders, the heroes of Leningrad, Kiev, and Odessa show how to defend every inch of Soviet land! Destroy Hitler's beast in every city, in every village! Destroy it on every road and passage! Destroy it on land, in the air, and on the water! Persevere, defend every street, every home! At the thresholds of Leningrad, Kiev, and Odessa many fascist divisions have been annihilated. The entire fascist horde shall die as well."

Translation of narration: Ten chosen German divisions, one hundred thousand fascist soldiers found in glorious end near Kiev's walls. During those days "Pravda", the newspaper, was writing: "The heroic defense of Leningrad, Kiev, and Odessa is exceptional for its moving example of devoted service to the Homeland and its native city." There is a striking emotion in turning the pages of the newspapers from those days, because the homeland defenders also read them. They were searching for the answers to their questions; they derived their faith and hope by reading them. Today we know about the heroic Moscow battle, about the battle in Stalingrad; we know about the Smaller Land [the name for the far East region in Russia], and about the tank combat near Kursk. Back in those very first months of war the most moving example, the biggest moral support for the people were the battles for Leningrad, Odessa, and Kiev.

01:10:50 Translation: [An abrupt start, with a few indecipherable words] The wall of resistance against the occupants. The situation was difficult inside the city. Not all who wanted to join the underground managed to do so. German authority order: "Everyone must register at the labor exchange. Those who disobey will be shot."

The paper document in Ukrainian: "Commissar-General. Kyiv, January 8th, 1942. Official Announcement. According to the laws of wartime all are subject to perform their labor duty. Everyone must work at the place appointed by the labor exchange. Workers, who do not show up at the appointed place or leave it either without their employer's agreement or without the labor exchange's approval, will be punished. They will be sent to labor camps, or receive more severe punishments."

The labor exchange kept track not only of hands but also of minds. [The narrator quotes from another German order] "Scientists, in their own interests, are invited to the labor exchange branch."

The Einsatz-headquarters, or pillage headquarters, occupied the building of a library on Kirov Street. This headquarters was one among hundreds of the same kind located all over occupied Europe. Lists of stolen paintings: A total plunder of cultural values is taking place.

"Immediately find Balzac's library, which, according to our information, must be in Berdychev. The library was turned into a warehouse for stolen goods.

01:12:11 Stills of a paper document. CU of hanged civilians. CU of a picture of a man. CU of Himmler's letter. VS of fires and explosion in Kiev. VS of dead civilians in Kiev and women mourning. CU of a woman with a stick who is searching for something in the ruins of a destroyed building.

Translation: [Narrator quotes from Wilhelm Keitel's letter] "You must spread such fear and horror that no desire to resist shall remain."

Nazis didn't succeed. The wall of resistance on this land was not destroyed. [Narrator quotes from Himmler's letter] Fall 1943: "To the higher SS and police command in Ukraine. When you retreat from Ukrainian areas, use every possible means so there will be not a single person left alive; not a single center of wheat left untaken; not a single house left undamaged; not a single well left unpoisoned. Do anything that a human being is capable of doing to fulfill this order. Yours, Himmler."

Do anything that a human being is capable of doing to cease to be human... [this is the narrator's remark considering Himmler's letter]

01:13:24 (Repeats Story 3167, Film ID 2489) which talks about the battle for Kherson; here the same footage is used without mentioning this battle. VS of a battlefield with German soldiers shooting the wounded. CU of a dead woman. CU of dead civilians lying on the ground. CU of a murdered child. CU of a woman with a child in her arms that is walking upstairs from a basement. [According to narration, these all are Ukrainian civilians that were killed by the Germans.] 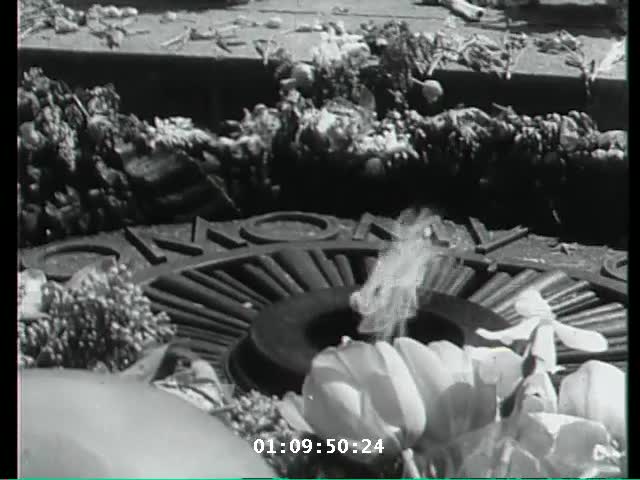 Biography
Professor Krymski Agafangel, 1871-1942. An outstanding scholar. He knew tens of languages; was one of the most reputable scholars in Oriental literature and history. He also was one of the founders of the Ukrainian Academy of Science. NKVD arrested him in 1941 accusing him of exhibiting "counter-revolutionary views". He died six months later in exile.