07:15:44 Amateur footage of bookburning. Includes scenes of many others making speeches, students in their uniforms (of dueling societies?) and with swords, SA men, band with brass instruments and xylophone.

07:19:07 "The Nazi Plan" version of bookburning coverage, title reading "The Burning of Books." Ends with brief title regarding the dedication of the von Hindenburg, "Christening of the New German Aircraft." (no footage) 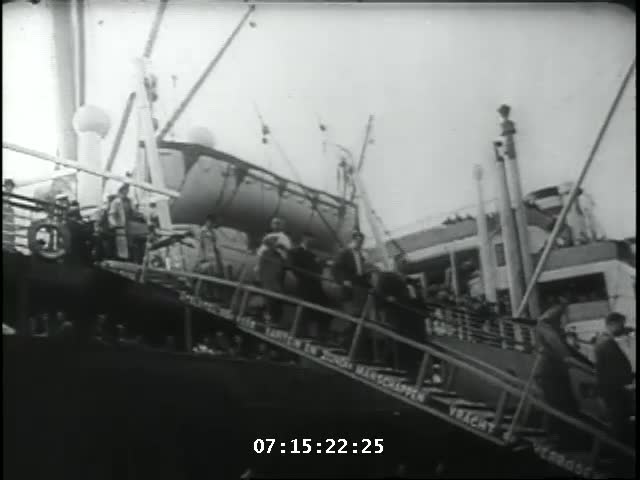 Legal Status
Permanent Collection
Film Provenance
The United States Holocaust Memorial Museum purchased this collection of film documents from Chronos-Media GmbH in Potsdam, Germany in 1989. Film and Video staff ordered videotape transfers in November 1991.
Note
Bookburning scenes here are largely different from what is usually seen, and much longer. Extensive views here of SA men near the fire, also university students in their club uniforms. Different views of tossing books near the fire, supplying material, but not as much throwing books directly on the fire.

The segments for this 16mm master (Film ID 149) are spliced together in a different order than the Betacam SP and VHS copies. They can be separated if necessary. This story appears second on the 16mm master.
Copied From
35mm; b/w
Film Source
Chronos-Media GmbH
File Number
Legacy Database File: 3671

Copyright
Copyright. Chronos-Media GmbH
Conditions on Use
Contact Chronos-Media at info@chronos-media.de for permission to reproduce and use this footage.
Record last modified: 2020-08-04 09:21:16
This page: https://collections.ushmm.org/search/catalog/irn1002996