Head title, "Freud, Sigmund at Poetzleinsdorf, Vienna, Austria, between 1925 and 1935." Title, "Freud on Holiday, 1920, Institute for Psychoanalysis, 1983." Nice views of Freud. [One web source on Freud chronology identifies Poetzleinsdorf under the year 1931 as: "Weakened by an operation for cancer, Freud spends the summer in a rented villa in the Vienna suburb of Poetzleinsdorf."] Various shots of Freud at the lake home and on the porch, talking with friends - women, men, and children. Mountains in BG. Man with glasses, next to automobile. Garden, with statue and table and chairs. INT, home, CUs of framed photos (dark). EXT, women in yard. Quick pan, EXT, home. Freud reading on lounge chair, in garden. Women at table, talking and eating. CUs, Freud reading, a dog at his side. [The dog was apparently given to Freud in 1928 by Dorothy Burlingham.] Man smoking, with hippy woman. At gate to villa, statue, EXTs, the grounds. Freud and woman walking in yard. 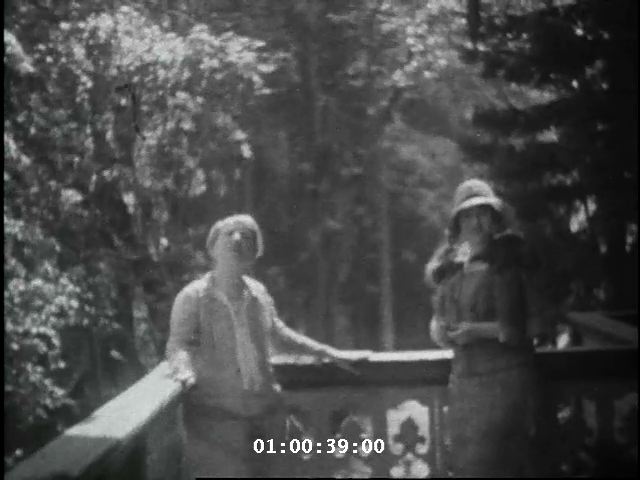 Legal Status
Permanent Collection
Film Provenance
The United States Holocaust Memorial Museum borrowed the original 16mm film from the Institute for Psychoanalysis McLean Library for transfer to tape in October 2002.The footage was obtained as research for the Museum's special exhibition in 2003 on Nazi bookburning, "Fighting the Fires of Hate."
Note
Scenes include his daughter Anna and Princess Maria Bonaparte. Presumably, one woman is his wife and one is her sister. No identity of others in the film, especially the men.
Copied From
16mm; b/w
Film Source
The Chicago Institute for Psychoanalysis
File Number
Legacy Database File: 3797

Copyright
Copyright. The Chicago Institute for Psychoanalysis
Conditions on Use
Contact librarian John Leonard at jleonard@chicagoanalysis.org for permission to reproduce and use this footage.
Record last modified: 2020-08-04 09:21:16
This page: https://collections.ushmm.org/search/catalog/irn1003112