Please note: Bruno Beger was involved in the "Ahnenerbe" -- the SS office for ancestral heritage, and later worked with Dr. August Hirt in building a skeleton collection from inmates at Auschwitz. See Robert Jay Lifton: The Nazi Doctors, pp 284-287 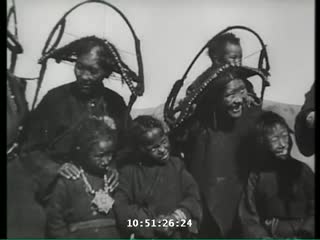 According to 6/26/13 email from carmenprokopiak@murnaustiftung.de (email forwarded to Bruce Levy and Leslie Swift), this footage does not belong to Friedrich Murnau Stiftung and they have no information as to who owns rights.
Copied From
35mm
Film Source
Bundesarchiv (Germany). Filmarchiv
File Number
Legacy Database File: 3889
Source Archive Number: 10212

Copyright
Copyright. Copyright Owner is Undetermined
Conditions on Use
Owner of copyright, if any, is undetermined. It is the responsibility of anyone interested in reproducing, broadcasting, or publishing content to determine copyright holder and secure permission, or perform a diligent Fair Use analysis.
Record last modified: 2020-08-04 09:21:14
This page: https://collections.ushmm.org/search/catalog/irn1003180