Title: "Germany defends itself against the atrocity-mongers [Greuelhetze] - In the struggle against the false reports in foreign lands, Jewish businesses across the country will be boycotted." March 30, 1933, the day before the official boycott of Jewish businesses in Germany. SA men driving through the street in the back of an open truck with a "Deutsche! Wehrt Euch!" sign on the back The SA men wave Nazi flags and the audio has people chanting, "Deutschland!" Civilians on bicyclists follow closely behind the truck as it weaves through the street. The scene switches to SA men posting "Deutsche! Wehrt Euch!" signs on the side and window of a building. One SA man looks grimly at the camera; several children also appear in the scene, looking into the camera. The scene switches to a large "Jude" and Star of David painted on the window of a shop (the last word of the shop name is "Alster" - the first part of the name is cut off on the screen). Several people look into the shop window and others pass by on the street. The scene switches to an SA man standing in the doorway of a shop; a boycott sign is posted in the window of the store. The street is quite crowded. The camera pans along the street and shows the awning of the store, which bears the name "Leiser." Another crowded street scene as an SA man paints a large star of david on a shop window, while the crowds watch. More crowded street scenes with boycott graffiti and signs in shop windows. One of the signs is partially in English.
Title: "Reichsminister Goebbels speaks in the Lustgarten". Goebbels' speech (4/1/33) at the Lustgarten announcing boycott of Jewish businesses. A huge crowd salutes and chants, "Sieg Heil!" Goebbels speaks; shots of the crowd listening attentively and close-up shots of Goebbels speaking. Crowd salutes again at the end of the speech. 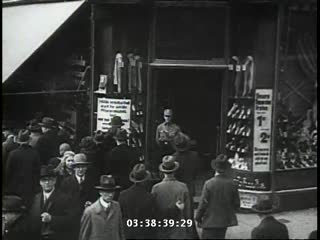