An aerial shot shows a huge crowd gathered for a May Day rally. Hitler arrives in a car. He speaks briefly, greeting the German youth and mentioning president Paul von Hindenburg.
Nuremberg.
More crowd shots, then Hitler is shown speaking again. He speaks of the German workers of all occupations and the Reich's second celebration of May Day. Vast field covered with ranks of uniformed men. This footage is from a different speech than the first one. 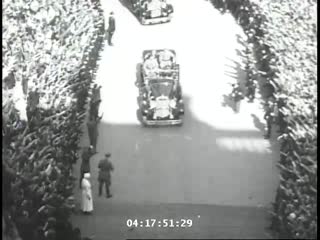