Hitler and Nazi demonstrations re: reparations

Hitler and Nazi demonstrations regarding reparations. Crowds line the streets as Hitler arrives in an automobile with Ernst "Putzi" Hanfstaengl. A close up shot of Hitler; Hanfstaengel in profile. Hitler reviews SA troops and Hitler Youth as they march down a street. 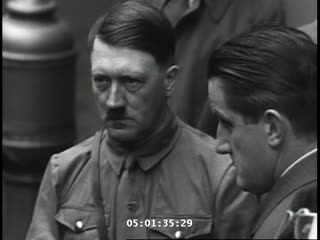 Biography
Ernst Sedgewiek Hanfstaengl (or Hanfy or Putzi, as he was usually called) (1887-1975), was a German-American at the core of the rise of Hitlerism. Born into a well-known New England family, he was introduced to Hitler in the early 1920s by Captain Truman-Smith, the U.S. Military Attache in Berlin. He became an ardent Hitler supporter, on occasion financed the Nazis and, according to Ambassador William Dodd, .".. is said to have saved Hitler's life in 1923." Putzi became not only an early friend, backer and financier of Hitler, but among those early Hitler supporters he was, .", . almost the only person who crossed the lines of his (Hitler's) groups of acquaintances." In 1931, Hanfstaengl became NSDAP foreign press chief. Hanfstaengl became alienated from Hitler in 1937 and fled to England. He was interned in a Canadian prisoner of war camp. With Germany and the United States now at war Putzi re-calculated the odds and concluded, "Now I knew for certain that Germany would be defeated." Putzi's release from the POW camp came with the personal intervention of old friend President Roosevelt.