Polish titles, mainly music track. Opens with quote from Ignacy Moscicki. Church seen from various angles. Madonna and child superimposed in the sky above the town. Religious procession along a road and in boats down a river, to 00:24:23. Singing. Bells tolling 00:26:15. Townspeople stream along the streets towards the ceremony. Train coming down the tracks. Children in ethnic costume present flowers to honored guest. A plaque bearing the name of Jozef Pilsudski (who died in 1935) is unveiled, former head of the Polish government and Poland's representative at Versailles. Man gives a speech. More religious procession. Canopy carried through crowds to church. Religious figures speaking. Close-ups of individual women praying. 00:38:35 Man prostrate on ground in form of cross. Crucifix and Christ, closeup. Crowds. Priest leads and crowd responds. Music over scenes of people buying and selling at market. People praying, contemplating statues of Jesus and Mary, pilgrims walking and climbing steps on their knees 00:44:-- Stations of the Cross. 00:46:30 Women and men laboring outside. They appear to be quarrying stone, putting it in railroad carts and wheeling it up a hillside on tracks. Men marching with rifles, over which is superimposed a Polish coat of arms. 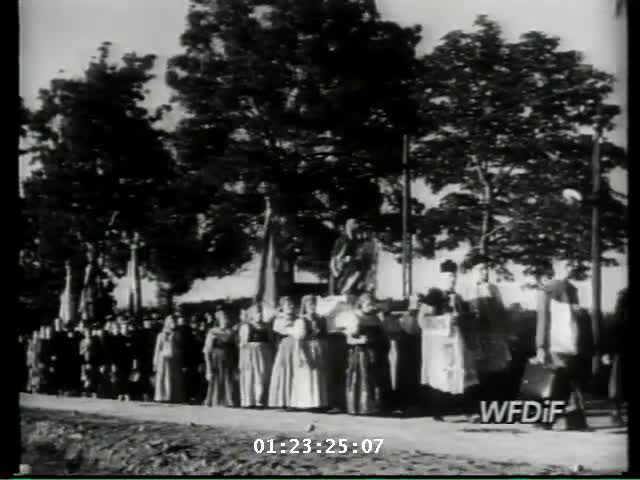 Legal Status
Permanent Collection
Film Provenance
The United States Holocaust Memorial Museum purchased this footage from WFDiF (Documentary and Feature Film Studio, Film Archive) in Warsaw, Poland in June 2003.
Note
USHMM Betacam made from VHS copies provided by WFDiF.
Among Polish pre-war religious short films, Salve Regina remains the most spiritual and artistic. Released in 1936, it is a cross between religious reporting and patriotic documentation. The work of an aristocratic family, the Countess Teresa Lubienska produced the film while her brothers, Ireneusz Plater-Zyberk (known by some as the “armless wonder”) and Ludwik Plater-Zyberk, worked as director and technician, respectively. The film emphasizes the attachment of the people of Silesia to the Catholic church and the Polish nation while maintaining their own unique traditions. In it, the people of Silesia go on a pilgrimage to the historic church of Wielkie Piekary, where King Jan Sobieski had knelt before the Polish cavalry against the Ottoman siege of Vienna. This pilgrimage also coincides with the tenth anniversary of the coronation of an image of the Virgin Mary on August 15th, 1925, the holiday of the Assumption of Mary. The film’s patriotic score was composed by Wladyslaw Macura.
Film Source
Filmoteka Narodowa
File Number
Legacy Database File: 4029
Source Archive Number: MF 0292 Reels 1,2,3

Copyright
Copyright. Filmoteka Narodowa
Conditions on Use
Contact FINA customer service team at dokument@fina.gov.pl for permission to reproduce and use this film.
Record last modified: 2020-02-04 10:40:08
This page: https://collections.ushmm.org/search/catalog/irn1003272