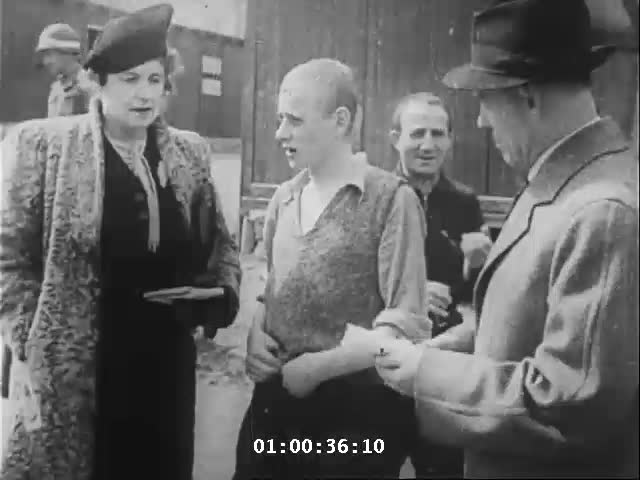 16 mm films, as well as letters, documents, photographs, and scrapbooks, were collected by Josef and Hadassah Rosensaft through the years since their liberation from Bergen-Belsen. The footage shows coverage of liberation at Belsen as filmed by the British and covered by newsreel companies. Materials were donated to the United States Holocaust Memorial Museum Archives by Hadassah Rosensaft in October 1989. Alternative accession numbers for this collection besides 1991.012 are 1989.0401 or 1989.126.

"Filmdokumente" on the German concentration camps, made under Soviet auspices with narration in English. This film was taken by a Soviet military film crew upon liberating Auschwitz in January 1945. eople in camp in winter with snow on the ground. CUs, prisoners behind wire (women and children). LSs, AVs, the camp covered with snow. Map of Auschwitz, plans for the crematorium. INT, women in rows of bunks. "Arbeit Macht Frei" gate. Barbed wire. INT, gas chamber. CUs women in the bunks. CUs albums of photographs (showing different nationalities). VS groups of survivors behind wires, worn faces, dead in the street, men with blankets over their heads. The evacuation of the camp - prisoners are helped and carried out; crowds march out (many wearing striped uniforms); horses and wagons carry the sick; children are led out by nuns and others, including child survivor Tomy Shacham at 04:10:04 wearing a uniform with extra-long arms and Eva Mozes Kor and her twin sister Miriam leading the group at 04:10:15. CUs, children, showing numbers on their arms. The girl in the center of the frame not wearing a uniform but a regular jacket is Sarah Racimora. The boy to her right is Rene (Guttman) Slotkin. HAS, procession of children moving in barbed wire enclosure. CUs, charred heads and remains of bodies in the ovens. CUs, cans of gas and other chemicals, bodies in a deep trench, one woman with an embryo beside her. Russian commission examines a deep grave filled with bodies. Prisoners demonstrate a scaffold, including the trap and noose. CUs, prisoners who were professors and doctors. Shots of storehouse: human hair in bundles, piles of false teeth, razors, brushes, eyeglasses, shoes and clothing. Russian soldiers hold up some children's clothing. Suitcases from all countries are also piled up. VS, women weep beside grave. A band plays the funeral march. Choir boys follow the band. Many coffins are carried to large grave as hundreds attend ceremonies. Priests and flag bearers attend. Women weep as the huge grave is covered. Doctors examine some of the survivors: an emaciated youth, children with bad feet, men with swollen ankles, all evidences of brutality. Some still photographs of formerly healthy children in contrast with conditions in the camp. Still photos of Nazis. ROLLING CREDITS at end: "Three Allied Powers will follow them over to the ends of the world and will hand them over to prosecution so that justice be served. Roosevelt, Stalin, Churchill."

Notes from the NFB/ONF online catalog: A Jewish Holocaust survivor takes a holiday from his glazier's shop to join an emotional pilgrimage to Bergen-Belsen. In traveling through new Germany, this man remembers. Scenes still vivid in his mind are recalled in flashback. The memorandum was Hitler's dealing with the solution to the "Jewish problem."

CUs, camp commandant Josef Kramer under armed guard. Canadian military soldier with a cap, Jack Marcovitch, on Kramer's left side. SS men unloading naked corpses (women) from truck into a pit. SS women on truck with corpses, dragging naked corpses to pit. CUs of bodies.

CU, pan up to clothed corpses scattered on the ground, group of survivors in BG. MLS, makeshift tent with survivors. CUs, survivors.

Nazi men dragging corpses by the feet to a mass grave/pit, more bodies in the grave, preparing for burial. Supervised by armed British solders in FG.

Burning the barracks at Belsen

Burning the barracks at Belsen

CUs, camp commandant Josef Kramer under armed guard. Canadian military soldier with a cap, Jack Marcovitch, on Kramer's left side. SS men unloading naked corpses (women) from truck into a pit. SS women on truck with corpses, dragging naked corpses to pit. CUs of bodies.

View All 22 Items in the Collection