Propaganda film of Jews in Stuttgart; food distribution; claim that rations are the same as for German citizens

Title: Lebensmittel Sonderverkaufstelle fuer Juden in der ehem. Gastwirtschaft "zum Kriegsberg" [Special food purchasing location for Jews in the former inn "Zum Kriegsberg"]. Jews wearing stars stand in line outside the former inn. Title: Liefertag [distribution day]. People in white coats remove boxes of food from trucks and take them into the store. A shot of the side of a car with an advertisement for Dr. Whilhelm Kraft's crispbread. People continue to unload goods, giving the appearance of abundance. The image is grainy and high contrast.

01:21:57 "Im Gegensatz zu den Behauptungen der juedischen Hetzer im Ausland standen die Rationen fuer Juden mit denen der deutschen Bevoelkerung auf..." Title on screen claims that contrary to the claims of the Jewish agitators abroad, the rations for Jews are the same as those for Germans. Interiors of the shop, where people hold ration cards. Stars are plainly visible on their coats. A shot of meat hanging from hooks. People select meat from a glass case. The supplies look plentiful. The last scene shows some kind of bag search and inspection of papers (?).

One of the Bundesarchiv records about this film notes that the Sonderverkaufstelle, located in Seestrasse, was the only location where Jews were allowed to shop for food. Since Jews could not use the streetcars, they were forced to walk to Seestrasse from all parts of the city. Often, after making a long trip, they would find no food on the shelves. The food shown in the film was ordered especially for the occasion. 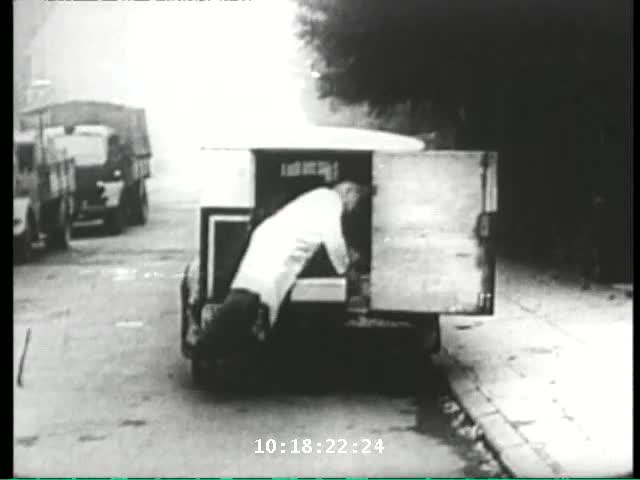 Legal Status
Permanent Collection
Film Provenance
The United States Holocaust Memorial Museum purchased the film excerpts from the Bundesarchiv in Berlin, Germany in March 2007.
Note
This film comes from a collection called the Kriegschronik, which was a series of films created to document the history of Stuttgart during the war years. More information about the Kriegschronik is available in Film and Video departmental files.
Copied From
16mm
Film Source
Bundesarchiv (Germany). Filmarchiv
File Number
Legacy Database File: 4983
Source Archive Number: 21008 R1