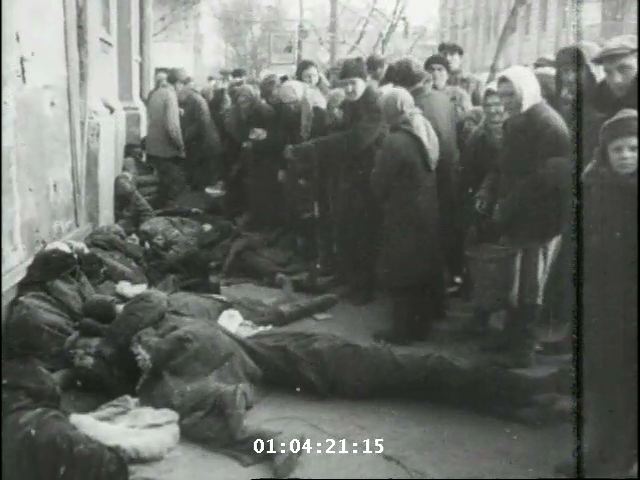 Legal Status
Permanent Collection
Film Provenance
The United States Holocaust Memorial Museum purchased this film from the Library of Congress in August 2005. As part of their "Russian Collection," the Library of Congress received the film from an arm of the US government, probably the Office of Alien Property or the Military Intelligence Division.
Note
This film was presented at the International Military Tribunal at Nuremberg on February 19, 1946 by Russian prosecutor Mr. Smirnov. This Soviet-made film was screened on the 62nd day of the Nuremberg Trial and submitted as evidence relevant to the indictment for "crimes against humanity." It is a re-edited compilation of Soviet footage that had been primarily used for propagandistic ends in wartime Soviet newsreels and documentaries and includes voiceover commentary. The one-hour film shows images of the extermination camps of Auschwitz and Majdanek and appeals to spectators' emotions by emphasizing individual victims.

The Library of Congress catalogs this film under the title "Concentration Camps."

See also Stories 26 to 29 on Film ID 5 for similar or duplicate sequences of Auschwitz and Majdanek.

Refer to RG-60.4642 for a better copy of this film from the Nuremberg Archives at the International Court of Justice.
Copied From
35mm reference print
Film Source
Library of Congress
File Number
Legacy Database File: 4998
Source Archive Number: FGE 9251-9254

Copyright
Library of Congress
Conditions on Use
Requests for duplication of moving image materials at the Library of Congress begin with the Moving Image Section reference staff (mpref@loc.gov), who gather basic information about the order, such as titles requested, format desired, collection restrictions (if any), and whether or not a copyright search is required. From there, the order goes to the Public Services Office for pricing and fulfillment. Refer to http://www.loc.gov/rr/mopic/copies.html for more information.
Record last modified: 2021-06-03 12:41:37
This page: https://collections.ushmm.org/search/catalog/irn1004154